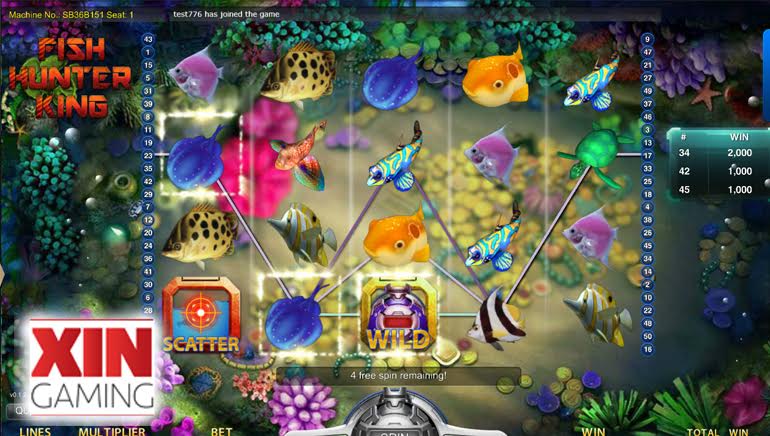 A brand new Asian slot game has been released to XIN Gaming casinos. Visit these sites to find Fish Hunter King and its majestic underwater visuals.

XIN Gaming has made a new online slot game for summer 2016. While Fish Hunter King will be entirely new to western players, their counterparts in China will be familiar with Fish Hunter as a beloved arcade game. Moving forward, the global casino industry will now get to learn about this fishing franchise.

When making Fish Hunter King, XIN Gaming has set out to make an online slot with numerous ways of creating winning combinations of symbols. To that end, the slot has been crafted with five reels and four rows, which means 20 symbols can appear at once. Going across the reels, there are 50 paylines in total.

For players, this is an innovative feature because slot games typically only have 15 symbols. What this means is that Fish Hunter King has more ways to win than the average slot game. In the industry, it is quite unusual to have a slot with four rows instead of only three. Some developers have done this before, but there are not many examples out there.

By visual design, XIN Gaming’s Fish Hunter King slot is a colourful experience. An array of different species appear as the various symbols, with each bringing a different colour scheme to the experience. The fish are then presented in front of a tranquil underwater scene, with multi-coloured coral displayed throughout.

XIN Gaming chief executive Mathias Larsson believes the new slot game will find an in-built Asian audience because of its popularity in the China. Larsson has also spoken of how Fish Hunter King will show Chinese players that XIN Gaming is aware of what its players desire. At the launch, Larsson also stated his belief that his company is the only developer capable of releasing a game of this style.