Flurry of New Microgaming Slots Releasing in May 2017 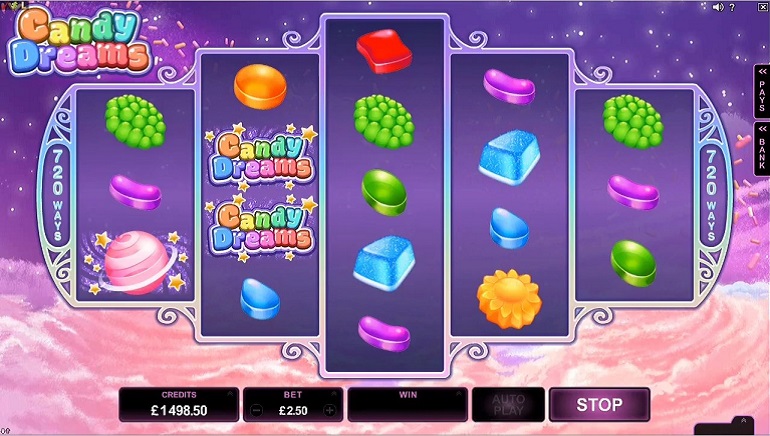 Visit Microgaming casinos in May 2017 and you will encounter five new video slots to check out.

Microgaming is one of the most prolific developers of video slots that the iGaming industry has to offer. That much is clear from Microgaming’s past output, which has risen even further after the developer released five new slots at Microgaming casinos for May 2017.

Leading off the new releases is Candy Dreams, which pursues a clear theme in adopting sweet treats for the various symbols and imagery. In the game itself, Candy Dreams will stand out to players for its expanded reels.

There are five reels across the entire slot, but Microgaming has included an extra symbol on reels two and four, while the third reel has two extra symbols. Players will then be able use the 19 on-screen symbols to try and create one of the 720 different ways of winning.

Microgaming’s Candy Dreams slot will also have a €110,000 jackpot and the ability to trigger 12 free spins alongside the Candy Planet Bonus. Players can pick planets in the bonus round to uncover hidden winnings.

Forbidden Throne goes in a very different direction by entering into a fantasy realm. Microgaming then weaves a tale where players will encounter Sorconass, the Queen of Ice, and Wulthor, the Elven Lord.

In the Forbidden Throne slot, Microgaming reverts to the familiar setup of using five reels and three rows. Players are then presented with 40 paylines that they can use to build up winnings with the aid of symbols such as spell books and amulets.

Some of the more advanced symbols, including the phoenix and the unicorn, will have the ability to be stacked. For further benefits, players can also unlock up to 30 free spins with the aid of the orb scatter symbols.

Fortune Girl is another example of Microgaming’s commitment to diversifying its slot themes. In this case, the Fortune Girl slot adopts a manga theme starring a stylish brunette and various colourful symbols.

The slot interface has been constructed with five reels, while Microgaming has downsized the paylines to 15. This contributes to an affordable experience where players can stake €0.15 on each spin.

Microgaming has included the Mystery Symbol in place of standard wilds, with players able to stack these and plug gaps on paylines. Also included in the special features are the Magic Lion symbols that can trigger free spins and yield a potential 1,200x multiplier.

Cute fantasy is the next major theme explored by Microgaming. In Goldwyn’s Fairies, players will encounter cute fantasy symbols. The principal cast is comprised of the four fairies that are named Spring, Summer, Autumn, and Winter.

In the design, Microgaming has maintained the five-reel by three-row structure while integrating 20 fixed paylines that cannot be decreased. As a result, players must lower the line bet to assign smaller stakes.

Goldwyn’s Fairies also has wild and re-spin wild symbols, but the more appealing feature will be trigger 10 free spins. These will include wild symbols to enhance the winning possibilities.

Día de los Muertos is a Mexican holiday that translates from Spanish to English as Day of the Dead. This is a theme that has previously been explored in video slots, but this version is Microgaming’s take on it.

Microgaming’s Beautiful Bones slot also goes along with the five-reel structure, but then the scale ramps up to accommodate 243 ways of winning. From a cost perspective, players can spin from just €0.30 on Beautiful Bones.

There is a helpful Wild Spin Again feature that will see the middle spot on the centre reel being held for a single re-spin. Beautiful Bones will also have free spins and let players compete to win up to 1,000x on each spin.