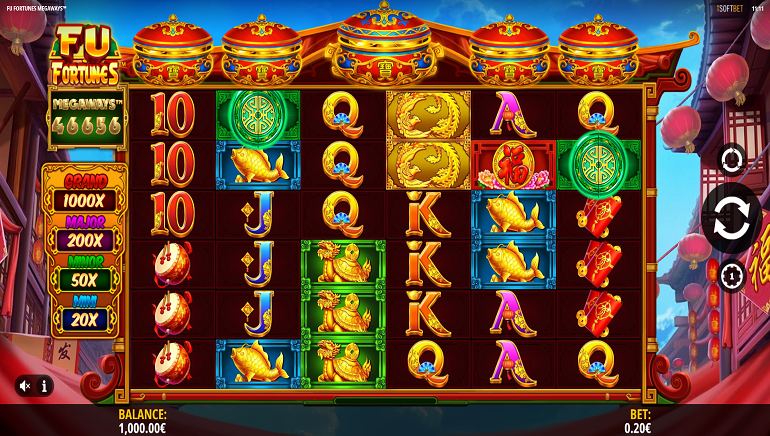 Exciting Megaways action, with some cool features, as you enter the world of Fu with chances for major jackpots!

iSoftBet is one of the industry's leading developers of iGaming software, enjoyed by millions of players every day. Their games can be found at many of the world's biggest casinos, and they have won numerous awards for their content.

One of their newest games is Fu Fortunes Megaways, an Asian-themed slot game that uses the Megaways game engine, which is an innovative way to play. The game features 6-reels on 3-6 rows with 46,656 paylines. There are Cascading Symbols, Random Multipliers, Jackpots, and Free Spins available, making this game one of their more thrilling.

Those that like Asian-themed games will really like this one. There is potential to win up to 25,000x of the bet, which makes this slot one of the better games for players that can take on its higher volatility, especially since the RTP is at 96%.

The Megaways system is quite unique. It actually changes the number of symbols on each reel, so the potential combinations can reach 46,656 winners.

The quality of the animations and graphic design is above the norm, and it is easy to tell that great effort went into developing this title. It's rich golden colors, exciting background, and immersive experience should please even the most discerning player.

Any slot aficionado can tell iSoftBet has a thing for Asian-themed games, which are abundant in their portfolio. They have really taken things to a higher level with Fu Fortunes Megaways, though.

Players are able to play this game in demo mode at the iSoftBet site before wagering any real money. This gives players a chance to get to know the Megaways system and get used to the high volatility that the game provides. Fu Fortunes Megaways is the fourth game that iSoftBet has released as a part of the Megaways Series, and they are all quite enjoyable.