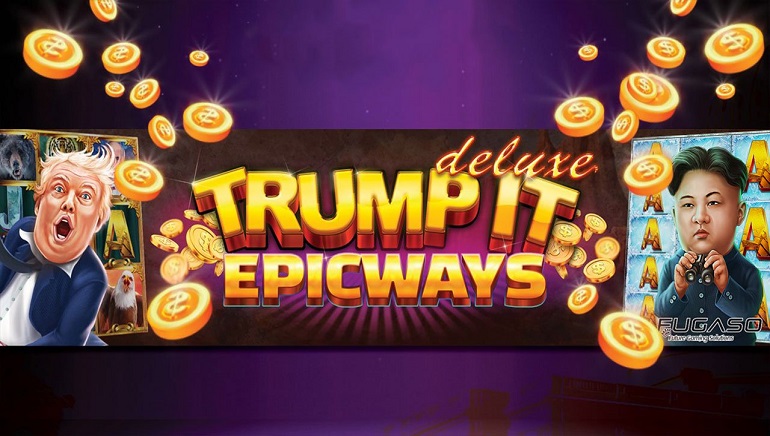 FUGASO has returned to a controversial topic with the amusing release of the fully upgraded Trump It Deluxe Epicways slot.

FUGASO has released an upgraded version of its Trump It Deluxe slot. Now available to play is Trump It Deluxe Epicways, which has been supersized with an enhanced slot interface and offers 15,625 ways to win (or Epicways). As before, Trump is joined by fellow controversial world leaders in the form of Putin and Jong-un.

Trump It Deluxe Epicways is played out in the Nevada desert, not far from Las Vegas. The huge slot interface consists of six reels and five rows to display 30 symbols, which is double the size of video slots with five reels three rows.

Users can play Trump It Deluxe Epicways from a minimum of €0.10, whereas high rollers can push their stake all the way to €10.00. An auto-play button is close to the play button and can assign five, 10, 25, 50, 75, or 100 spins. Meanwhile, there are advanced settings provided to cease auto-play after a win, free spins are triggered, or if a handful of monetary outcomes occur.

Trump It Deluxe Epicways is programmed with 96.21% return to player (RTP) and can pay-out winnings on symbols chains of three or more. A winning chain has to begin from the left of the screen and the number of Epicways can vary depending on the size of the symbols.

Wild symbols will substitute for base game symbols, while scatters are intended to launch free spins. Three or more will be needed to secure from 10 to 50 free spins. Also thrown into the deal will be a special expanding symbol that will be chosen randomly by the in-game software.

If free spins are proving elusive, then players can opt to click the “Buy” button displayed beneath “Bonus Bet”. There’s only one price and it’s displayed above the button. Once clicked, the player will initiate a bonus round with free spins.