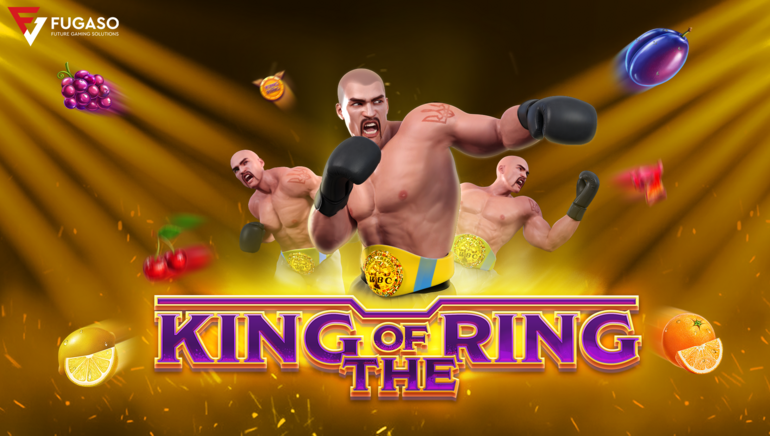 King of the Ring is the bee’s knees of knockout slots from Fugaso. It features a ritzy-glitzy backdrop of ticker-tape, spotlights and raucous entertainment. The 3X3 grid format keeps all the action neatly packaged in a tight ‘ring’ where players can dance like a butterfly or sting like a bee. This fruit slot features all the standard game symbols, including watermelons, oranges, plums, cherries, grapes and the hardest-hitting boxer in the ring.

Who’s the King of the Ring Now?

The bruiser boxer is known simply as The King of the Ring, wearing a gold championship belt. Always ready to defend his title, The King of the Ring has impressive moves like right jabs, left jabs, and uppercuts. But the in-game features resonate most with players in Fugaso’s latest video slot game. So watch for King of the Ring medallions and blazing-hot Red 7s. These symbols are high-value icons with big winning potential.

Players have the potential to snap up some great winning combinations with loads of free games and generous multipliers to boot. With crowds roaring in the background and hip hop beats playing out, this is one top slot that redefines the classic slot genre. It’s a suped-up version of traditional fruit slots. Every sound clicks and locks into place with prizefighter precision. Fugaso encourages max volume with every spin; it’s an immersive experience.

Big action occurs when multiple King of the Ring symbols land on a reel – that’s when maximum animation kicks in. Then, the prizefighter expands to fill the entire screen with a halo of golden light announcing his arrival. Players can easily adjust bet sizes by clicking on the up/down arrow buttons on the bottom right of the screen. With low minimum wagers and high maximums, it’s designed to be affordable for any budget.

Unique Features of King of the Ring Slot Game

The high-paying symbols in King of the Ring include:

The low-paying symbols in King of the Ring include:

This slot machine game is deemed a classic slot even though it’s super-energized with HD animation, 3D effects, and Vegas-esque audio. The Return to Player (RTP) percentage is 96.63%, and the maximum exposure multiplier is X1275. This Fugaso slot machine game is available across multiple markets and enjoys widespread exposure to a global audience of fight fans. Anytime free games are issued, they display in a box on the top left of the screen.

The Bonus Round requires players to land a left jab from the King of the Ring. Players can hit extra bonus wilds at the centre of the reels when the boxer symbol expands to cover the whole screen. There are five fixed lines in play at all times. Each of the paylines presents a unique pattern for players. The random multiplier reel, featured off to the right-hand side of the main reels, can boost payouts.