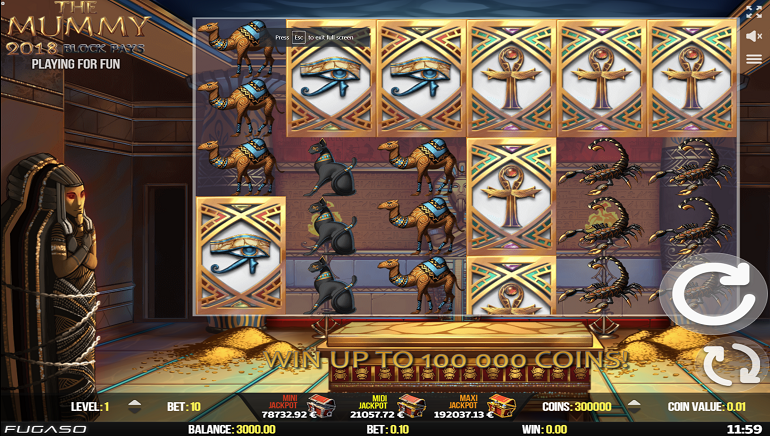 Fugaso has had a very good recent period, with their network of jackpots going from strength to strength and the company entering an important strategic deal with SoftGamings.

August has been a great month for Future Gaming Solutions, better known as Fugaso, a developer of casino games who's gone from strength to strength in a highly competitive market. Awarding a big jackpot just shy of €100,000 to one lucky player and expanding its presence with a new content supply deal, the company is set to significantly improve its visibility and popularity among the players.

Fugaso's network of progressive jackpot slots has treated many players to big wins over the past month but the month of August saw one particularly lucky individual claim a €99,185 win spinning away at The Mummy 2018: Block Pays slot at €2 a spin.

The Mummy 2018 is just one of many slots in the company's Jackpot Series. Every game that's part of the progressive network provides players with a chance to win one of three jackpots (Mini, Midi, and Maxi) on every spin. The lucky August winner claimed the Midi Jackpot playing at one of the brands powered by GrooveGaming.

With a constantly growing presence across numerous operators and with a big surge in a number of players trying their luck with Fugaso titles, the jackpots are growing rapidly as well, promising an even bigger bounty for the next lucky winner in line.

Expanding Its Presence Through SoftGamings Deal

While Fugaso slots have experienced a big increase in popularity over the recent period, the company isn't resting on its laurels and they've been very active in seeking new opportunities to improve their market presence and reach even more players across the globe.

The latest deal with SoftGamings is one of the results of these efforts. Fugaso has entered a content supply deal with one of the leading gaming platform developers, granting SoftGamings with all the required rights to include the full gaming portfolio into their offering. This includes a number of the latest hits developed by the company such as Trump It Deluxe, Fugaso Airlines, Stoned Joker, as well Imhotep Manuscript, a unique seven-reel slot that has generated a lot of attention from the operators and players alike.

According to SoftGamings' Irina Sazonova, there is a new breed of players out there and these players are putting a constant pressure on the operators to keep providing them with the best gaming experience possible. The strategic partnership with GrooveGaming, the exclusive distributor of Fugaso games, aims to meet these expectations and provide players with what they're demanding.

On the Fugaso's part, this deal will help the company to continue strengthening their market presence and move towards the goal of achieving the critical mass they're looking for. The SoftGamings platform features many of the big names in the industry and according to Yahale Meltzer, COO of GrooveGaming, Fugaso is very happy to be a part of this select company.