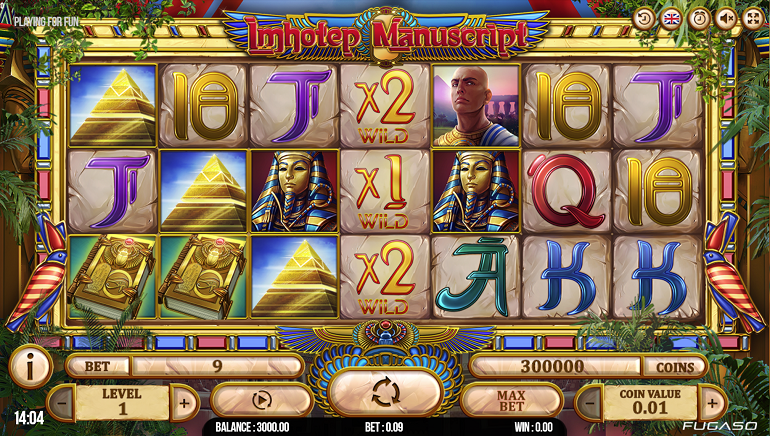 Learn more about Ancient Egypt by checking out FUGASO’s Imhotep Manuscript, a new slot game with seven reels, free games, and other features.

Software provider FUGASO has reached thousands of years back into the depths of history for the development of its Imhotep Manuscript slot. Distinctly Egyptian in theme, Imhotep Manuscript promises to be an intriguing experience in more ways than one.

Imhotep is an important figure from the times Ancient Egypt, having lived around the late 27th century BC. He is mostly known for serving as chancellor to Pharaoh Djoser, designing pyramids, and also for acting as a physician. Since his death, Imhotep has become deified within Egyptian culture.

What makes Imhotep Manuscript stand out is the fact that FUGASO has complemented the three rows of the slot interface with seven reels. A total of nine fixed paylines have then been integrated, with players triggering multiplier payouts by matching at least three symbols over the reels.

FUGASO has implemented a wagering system with a wide range of choices in regard to the values. Coins can vary in value from €0.01 to €1.00 and the betting level can go from one to 10, thus allowing a top wager of €90.00. At the bottom end of the scale, meanwhile, the lowest wager of €0.09 can be made.

Multiplier wilds play an important role by not only substituting for missing symbols, but also for giving a boost to winnings. An array of multipliers going from 1x up to 6x ensure that players can gain a suitable boost from a wild symbol landing inside of their winning payline.

FUGASO has also integrated free games within the special features, and these perks can be unlocked by landing scatter symbols on the reels. Three scatters can trigger 10 games, four will earn 15 games, five will deliver 20 games, and six can provide 25 games, which is the maximum.