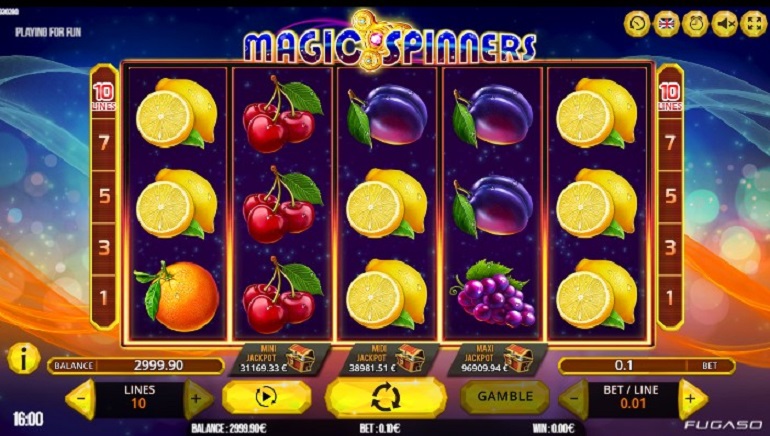 Fugaso has brought out a colourful new slot game for July 2019. In Magic Spinners, the symbols are drawn straight from a bowl of fruit, including cherries, grapes, prunes, watermelons, lemons, oranges, bananas, and a couple of special images.

One of those is a flaming 7 that can pay out a potential €2,000.00 base game jackpot if five symbols are matched on a single payline. Speaking of which, Fugaso has integrated 10 paylines in to its Magic Spinners slot.

For convenience, players can activate as few or as many of the paylines as they wish. All paylines have been designed and displayed within the paytable, where it is revealed by Fugaso that the paylines have the power to pay both ways.

An image that is comprised of three spinners and a central jewel is used as the wild symbol. In Magic Spinners, the wild can appear only on the second, third, and fourth reels. Wilds substitute for symbols on the same reel and will also hold all symbols in place until a complimentary re-spin had been granted.

Magic Spinner is also notable for being released as part of Fugaso’s Jackpot Series of slots. As a result, every paid wager will provide a contribution to increase the value of the progressive jackpot that is pooled by real-money players.

There are three progressive jackpot tiers to play for, beginning with the Mini Jackpot, and above that is the Midi Jackpot. However, the biggest pot of the lot is the Maxi Jackpot that can grow to be worth thousands.

As it stands, more than 30 Fugaso slots have been released in its Jackpot Series. As of July 2019, Magic Spinners shall join other well-known titles such as Fugaso Airlines, Trump It Deluxe, Mega Power Heroes, Cosa Nostra, Plagues of Egypt, and Knockout: The Last Fight.