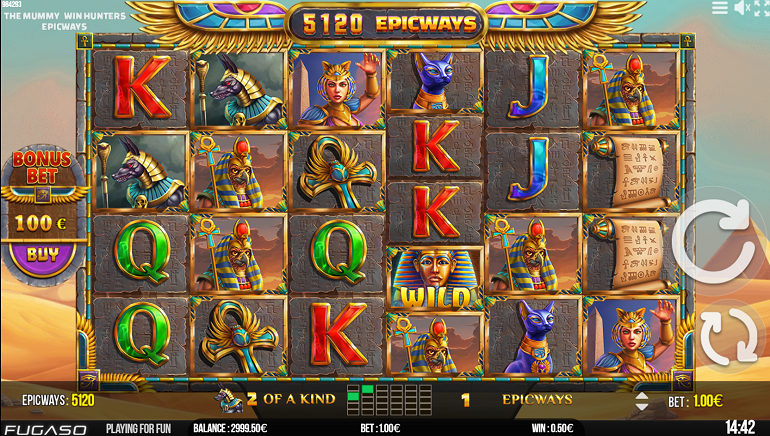 The new game features up to 15,625 ways to win on each spin and an exciting bonus feature (that can be bought as well) with a potential to create some big wins.

Fugaso has joined the growing group of game developers to launch new titles in 2021. Their latest game, named The Mummy Win Hunters, is the first title in the new year and the second to feature EPICWAYS.

For their new release, Fugaso has picked a theme that's always popular with the players - that of Ancient Egypt and its centuries' old mysteries. With six reels across and up to 15,625 EPICWAYS available on every spin, The Mummy Win Hunters features symbols such as mysterious scrolls, ankhs, cats, pharaohs, and, of course, mummies, which act as scatters and trigger the free spins' round.

Graphics are very sleek and polished, with the reels set on the backdrop of the Egyptian desert with pyramids in the background. The exciting soundtrack adds to the overall experience, adding to the anticipation and making every single spin interesting.

Players who enjoy games with a potential for big wins will enjoy The Mummy Win Hunters EPICWAYS. The bonus feature will see one randomly selected symbol turn into an expanding scatter, paying wins regardless of where the symbols land on the reels.

With up to 15,625 ways to win on each spin, it's clear that the new game by Fugaso is capable of producing some massive wins going up to 50,000x the base stake, and some lucky players are bound to have very good bonus rounds in the weeks to come.

For those impatient, Fugaso has also incorporated the bonus buy feature. For the cost of 100x the stake, players can buy the bonus and skip the part where they try to get lucky and land three scatters in the base game.

The Mummy Win Hunters Slot EPICWAYS is also a part of the Fugaso jackpot network, which means that players can win one of three progressive jackpots (Mini, Midi, and Maxi) on every spin.