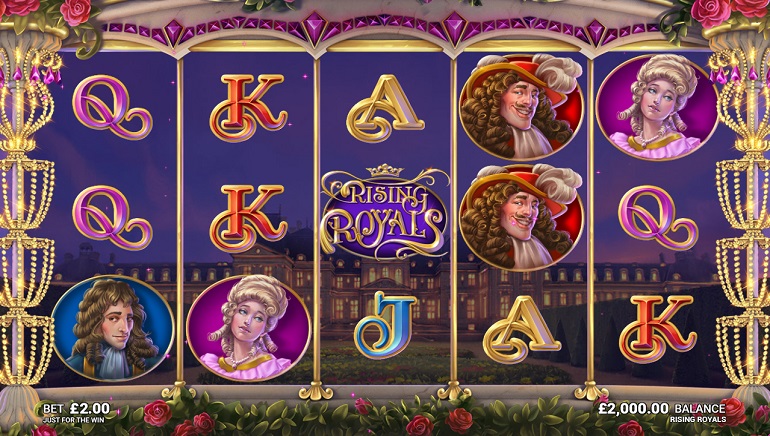 Take in the opulent sights of the Palace of Versailles in Rising Royals, the brand new slot from Just for the Win and playable at Microgaming casinos.

Microgaming casino sites have received yet another brand new video slot that is available exclusively from Just for the Win. Rising Royals is a regal video slot experience that is set amidst the stunning grounds of the Palace of Versailles, during a time when France still had a royal family ruling over the nation.

Developed by Just for the Win

Just for the win operates as an internal development studio within Microgaming and has been responsible for making a series of stand out video slot releases, including Deco Diamonds and Deco Diamonds Deluxe, as well as Tweethearts, Shogun of Time, Amazing Aztecs, Goldwyn’s Fairies, and Tweethearts.

A gilded slot interface has been crafted with five reels and three rows. A royal family of symbols then appear on the reels next to playing cards and the Rising Royals logo symbol. However, the main challenge is to attempt to match up identical symbols across the 20 fixed paylines that are built in. Wagering can climb all the way up to €250.00, while it is possible to trigger a maximum multiplier of 300x.

As expected, the royals command the highest multipliers when matched on the 20 paylines. Plus, they carry the benefit of being locked in their positions when appearing in sequence on any of the paylines. In turn, this causes the reels to re-spin for the chance for players to add more symbols to the payline. This feature ends when no more symbols are added.

The Symbol Lock Re-Spin feature can potentially lead to the Symbol Upgrade being triggered. With every consecutive royal who lands during a re-spin, a chandelier upgrade meter lights up to the sides of the screen. If three consecutive increases are achieved, then this causes the royal symbols to be upgraded to the next highest on the paytable.