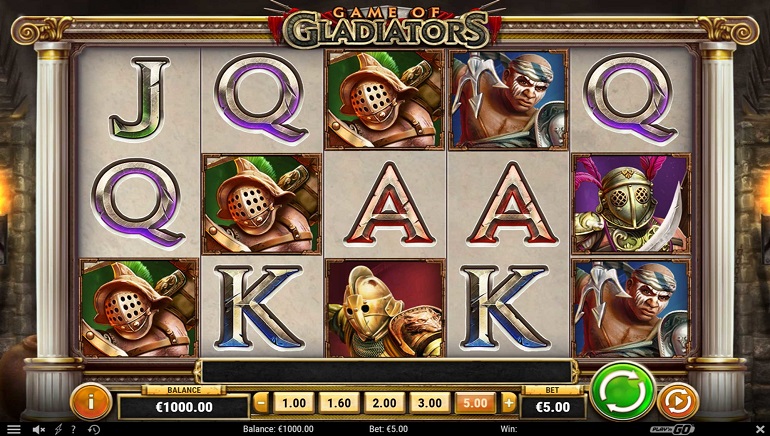 Enter the Arena and do battle in Game of Gladiators, a battle-hardened slot that is rich in combative special features to unlock.

The savagery of Game of Thrones has come to an end and now Play’n GO is filling a void with the brand new Game of Gladiators slot this June. Play’n GO has already confirmed the slot will be compatible for both mobile and desktop devices.

Game of Gladiators comes with a cast of deadly warrior symbols that can be matched for winnings over the five reels, three rows, and 20 paylines of the slot. The wagering then starts from €0.20 and rises in €0.20 increments before steeply reaching the maximum of €50.00.

The scattered gates can open up free spins when three symbols appear in unison on reels one, three, and five. Enter the arena and gain unlimited free spins until either the battle is won or lost. During free spins, all wild symbols are expanded to cover three rows and there is a chance to win up to 5,000x.

A champion can be chosen depending on which unique victory bonuses they can offer. Spartacus can retrigger a special feature if he wins, while Amazonia can provide 20x to 100x times the wager. There are 12 opponents in total, with each champion having one attack, attacks awarding prizes, second attacks earning 2x, and a third attacking being worth 3x.

Primus is a randomly triggered feature that can provide the player with one of five benefits. Spear attack causes three to six spears being thrown at the reels and becoming wild. Sword Attack then leads to the first reel being duplicated two to four times.

The Net Attack has the ability to stick a gladiator in place when thrown, with a re-spin then occurring. Meanwhile, Fame can lead to a payout from the gladiator and their place in the paytable. And then Enraged will cause two full reels of symbols to become entirely wild.