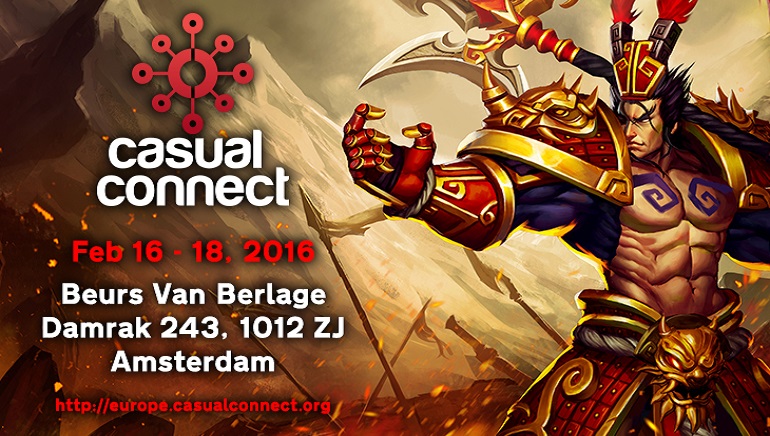 Casual Connect Europe stops in Amsterdam for a weekend in February.

The next stop for Casual Connect Europe is Amsterdam, a city breathing history and culture, while also being a hub for entertainment. Participants will enjoy the best of both worlds, as they would spend some quality time in a vibrant European city, while interacting with the gaming industry leaders.

Casual Connect Amsterdam 2016 is scheduled for the third week of February, with the convention starting on Tuesday, February 16. For three straight days, participants will connect with other people sharing their interest for the games industry and exchange potentially lucrative ideas. The event is all about encouraging new media innovation and supporting the creativity of this fast-growing industry.

As many as 2000 professional attendees are expected and more than 170 speakers will also participate in this year’s Casual Connect Amsterdam. Furthermore, there will be 120 Indie Prize Showcase Teams present on site, ready to sweep participants off their feet and turn the city into a hotspot for the gaming industry.

Join the Revolution in Social Gaming

During the three days of Casual Connect Amsterdam 2016, the most interesting and sensitive topics will be debated by prominent speakers. They will share their knowledge on market navigation and give industry insights, regarding the forecast of online gaming. As next-generation game makers prepare for the industry’s next boom, participants will be given the heads up about what the tech giants are up to.

Design and development topics are also well covered, with famous speakers debating the rise of mobile gaming and explaining the success of independent game development studios. Those who attend the Casual Connect Amsterdam 2016 will also find more about the hottest trends in the industry for this year. Interesting theories about the imminent Flash apocalypse and the future of HTML 5 games will be on the table, with discussions led by expert speakers.