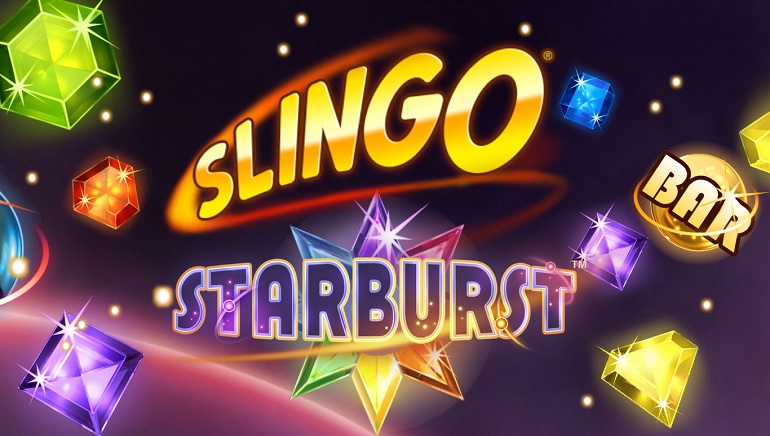 This new game is a mix between NetEnts' Starburst and Gaming Realms' Slingo series.

On October 7, 2020, Gaming Realms entered into a licensing deal with gaming giant NetEnt, and the first fruit of their labor has been released. Slingo Starburst is the name of the new game and as the name suggests, it is a blend of the features of NetEnts' wildly popular game - Starburst, and, the Gaming Realms' Slingo genre.

With Slingo games, wins are generated with the Win Spin bonus, which appears after 3 or more Slingos are achieved. Moreover, this can lead to big payouts of up to 1500x the initial wager.

The game has a lot of the features that players have come to know and love, but, there are some new things too. First, the "Purple Gem" symbols, which will reward players with an instant cash prize when a single spin reveals 3 or more. At the end of 10 regular spins, at the end of the base games, there is an Extra Spin chance wheel that will be activated. If players land on the green area, a free re-spin is rewarded on the Slingo reel, which will repeat over and over again until the player lands on the red section. There is the chance for a maximum of 5 extra spins in a row. Additionally, players can win a spin on the Starburst slot reels for a guaranteed win, which is a great example of how slots and bingo can merge.

The game was launched in New Jersey and will be a part of the online gambling platforms that are partners with Gaming Realms therein. In Europe, Betsson Group will get the rights for the game, and in the UK, Entain Group will have it.

Following the launch, it has already proven to be a top-performing game in terms of wagering and unique players.

The game is now live and players can check it out at a number of sites in the US, Europe, and the UK.

“We are delighted to have launched our first game in collaboration with NetEnt. Starburst is one of the most popular slot games globally and has dominated the gaming industry for years. In combining this with the best elements of our Slingo genre, we have created an exceptional game that we are confident will be enjoyed by fans worldwide,” said Mark Segal, Chief Financial Officer of Gaming Realms