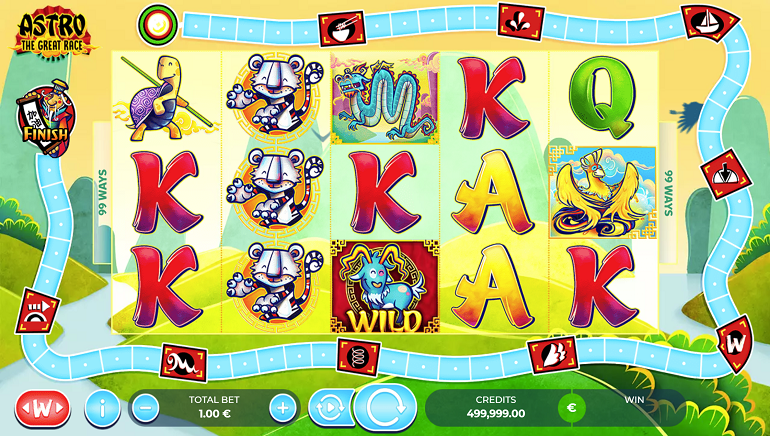 Astro: The Great Race is a new slot from GAMING1 that pays homage to the Chinese New Year by embracing the Zodiac.

Coming in the wake of the Chinese New Year is a brand-new video slot from GAMING1, a software provider that develops games from studios situated in Belgium and Malta. At participating GAMING1 casino sites, it will be possible for users to play the newly released Astro: The Great Race slot, which follows Mystic Pyramid and Boost Racers as other recent launches.

After emerging in February 2021, it was revealed that Astro: The Great Race utilises the Chinese Zodiac, which was devised by the Jade Emperor as a means of racing to the Heavenly Gate. The slot is playable on mobile and desktop devices that instantly load the five-reel interface.

At the start of the game, players can choose their preferred wild symbol from one of the 12 animals that are represented on the Chinese Zodiac. When selecting a wild symbol, users can discover which animal correlates with their birth year and what qualities are symbolised.

When playing, a user can assign wagers of €0.10 up to $10.00 (jurisdiction dependent). The slow can also enable the selection of auto-spin that include 10, 20, 50, 100, or infinity. Options are also available to select loss and win limits.

There are 99 ways to win and users can progress along the Astral Race track that surrounds the slot’s interface. After a winning spin, the user will receive a cookie that will randomly advance their token by zero to six places along the track.

In Astro: The Great Race, the track has 10 bonus milestones that can be unlocked. Each milestone contains a mini-game in which the user can win a bonus to support their attempts at winning. The mini-games include Feast, Dip, All Together, Double Wheel, Halfway, Celestial Fight, From Leap to Leap, Forced Swim, Increasing Wheel, and New Year.