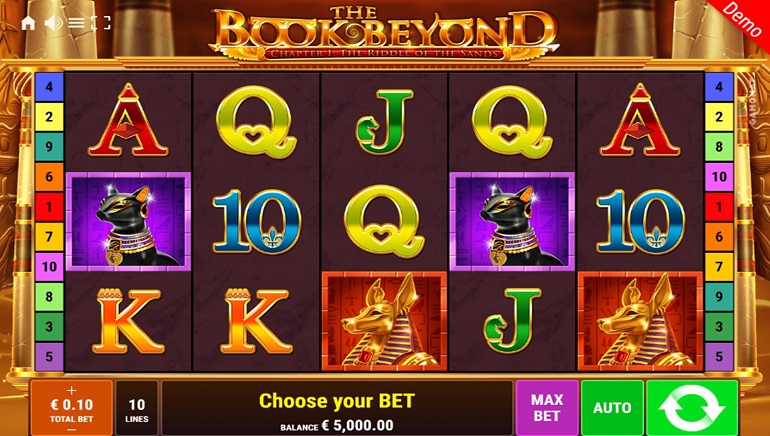 The Book Beyond is a new ancient Egyptian themed slot from GAMOMAT. It's set to be the first in a series following the same topic.

The Book Beyond is the first in a planned series of online slots from GAMOMAT and ORYX Gaming. It follows the adventures of an explorer as he races to find an ancient Egyptian book with the power to save the world.

Played out over 5 reels and 10 lines, The Book Beyond: Chapter 1: The Riddle of the Sands, awards players with up to 100 free spins at a time. Symbols can nudge to trigger the free games, and during the round, a special symbol appears stacked on reels.

This PC and mobile compatible game features classic icons such as the Eye of Ra, scarab beetle, and the statue of a black cat. GAMOMAT has given the game a backstory, involving Alex, a young man on a  vital mission to find the book.

The gold, jewel-encrusted Book of Ra is both a wild and scatter symbol. As a wild, it can stand in for others to complete wins, and as the scatter symbol, the book awards 10, 25, or 100 free games when seen in any 3, 4, or 5 places.

Before the games begin, there's an animated sequence that sees the book opening up before Alex to reveal a bonus symbol. This symbol will appear stacked during the free games, making it easier to see it in a winning combination.

High Drama In The Desert

Matevz Mazij, Managing Director of ORYX Gaming, said: “This game introduces a fresh and exciting experience for players but with a trusted and proven theme.

To further add to the thrilling storyline, the game comes with narrative elements and additional introduction videos to fully immerse players in the game experience. This title makes an excellent addition to any operator’s lobby.”