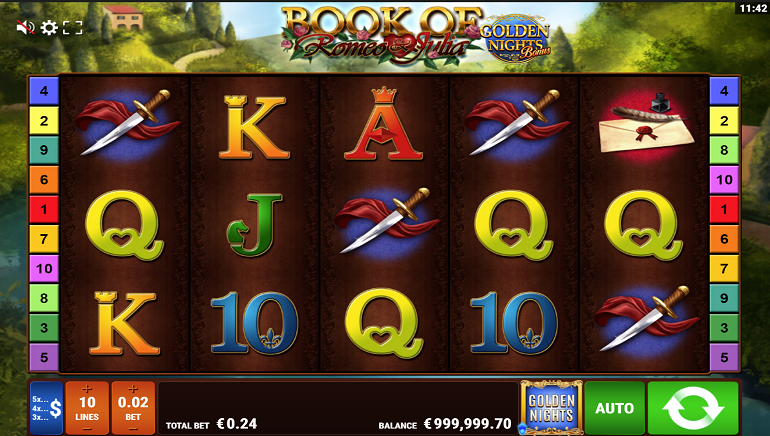 Book of Romeo and Julia: Golden Nights Bonus is a romantic update on the 2016 original slot from GAMOMAT, featuring free spins and a jackpot mini-game.

GAMOMAT has decided to revisit the Book of Romeo and Julia slot developed by the studio. In this retelling of the tragic Shakespearean romance tale, players will now encounter the Book of Romeo and Julia: Golden Nights Bonus, which arrives more than four years after the original January 2016 slot that released at participating GAMOMAT casino sites.

Book of Romeo and Julia: Golden Nights will continue as a five-reel slot and with three rows, while providing compatibility for Windows or Mac on desktop devices and Android or iOS on mobile. At release, the slot was playable in up to 25 languages. Also, the sequel has been released with high volatility and an average return to player (RTP) of 96.12%.

The symbols include playing cards from 10 to A as well as a dagger, letter, and the star-crossed lovers. GAMOMAT has integrated 10 adjustable paylines and a line bet button with values ranging from €0.02 to €1.20. If all of the powerlines are active, the minimum bet can be €0.24 and the maximum €14.40.

The Golden Nights Bonus is a mini-game that can be activated on each spin for the chance to win an additional jackpot. After the mini-game begins, the player will see three chests open in succession from left to right. When all three of the chests are full, the player shall advance to a thermometer that can grant a jackpot win that can rise through Iron, Copper, Bronze, Silver, Gold, Jewel, or Super Jewel at the top.

Meanwhile, the book symbol serves the dual function of being a wild and a scatter – incidentally, five books are worth the same as five Romeo symbols on a payline. Additionally, if at least three books can be landed on the same turn, the player will receive 10 free spins as a reward for their success.