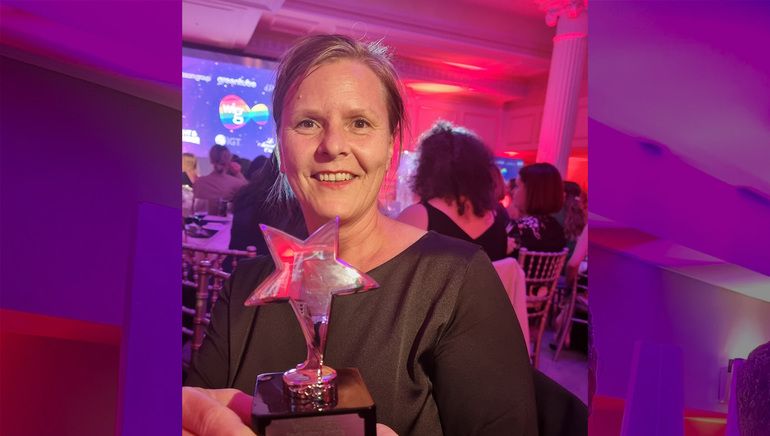 The personal and organisational diversity of GAMOMAT has been recognised at Women in Gaming, Diversity

The recipient was GAMOMAT Chief Design Officer Sabine Müller, who landed the Industry Pride of the Year award at the 2022 Awards Ceremony.

The 12th edition of the Women in Gaming Diversity awards were held at London’s acclaimed London Savoy Hotel on 15th September. A prestigious panel of judges canonised Müller’s status as a role model, born of her vision, innovative approach, and success.

Sabine was recognised after 15+ years of iGaming service overseeing product innovation, branding, and marketing at GAMOMAT since 2019.

Of the victory, Sabine said:

“I’m incredibly proud to have won the Industry Pride of the Year Award at this year’s Women in Gaming, Diversity event. Our industry offers a vast array of opportunities for women wanting to work within a hugely rewarding environment and being able to inspire more people to carve a path within it brings great joy.”

The award paves the way for more women to realise increasingly diverse careers in the land-based Gaming or iGaming industry.

About the Awards Ceremony

The awards were born as the Women in Gaming Awards. As the awards gained prestige the Diversity element to emphasise the nature of the positive changes in the gaming industry being recognised.

Sabine’s victory is the culmination of a move to the forefront of iGaming that was bolstered by her 2019 appointment to the GAMOMAT organisation.

Germany-based online content developer GAMOMAT has moved to a leading position in gaming development and provision by optimising slot gaming experiences. GAMOMAT established itself as a land-based gaming business before expanding to the development of cutting-edge iGaming products.

At this point, GAMOMAT’s content portfolio includes over 150 online games available for real money and social casino vertical play, and is being enjoyed in 35+ countries and 27+ languages. A passionate and enthusiastic team of over 70 developers is behind the help of each GAMOMAT release, and Sabine has played a major part in overseeing these dynamic teams at GAMOMAT.

The Women in Gaming, Diversity recognition firmly positions Sabine as a diversity pioneer and a champion of achievement. The award further provides a boost in industry credibility at the personal and organisational level and can only spur further success and growth for the cooperative synergy of Sabine and GAMOMAT.