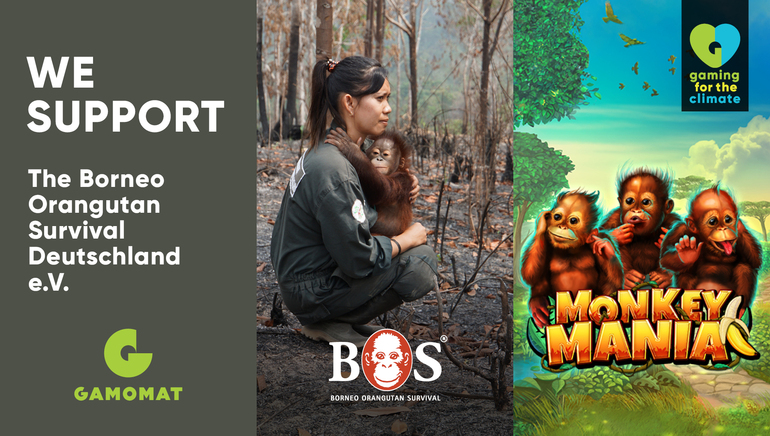 November 1, 2022 - GAMOMAT, a premier independent developer and producer of slot games, has added the laugh-out-loud Monkey Mania slot machine game to its Gaming for the Climate initiative. This is to aid the Borneo Orangutan Survival Fund Germany e.V. Proceeds will be used for essential projects in the country.

BOS (Borneo Orangutan Survival)  fights to protect Mawas forest in Borneo, where Orangutans are endangered. GAMOMAT donated 12,000 EUR to get things moving. Borneo conservationists will use the money to build dams and replant peatlands with native plants. It will also finance patrols to safeguard the region from illegal fires and other threats.BOS will also receive a portion of Monkey Mania's monthly GAMOMAT revenue over the next year.

Features of Monkey Mania by GAMOMAT

Monkey Mania has a maximum win multiple of 1,000x. Players will be taken on an adventure under the canopy of dense jungle foliage, where they will find adorable animals in the trees and on the ground. The most famous symbol is the cuddly Lion cub. Monkey Mania Scatter and Monkey Wild icons are also highly sought after. Three Monkey Mania symbols anywhere on the spinning reels can reward players up to 10X games for free.

Monkey Mania slot is readily available for desktop and mobile devices. This medium volatility slot has an RTP of 96.17%. It plays on a 5x3 grid with 10, 20, or 30 paylines. The many in-game features are Stacked Wilds, a Card Gamble element, and a Risk Ladder. This monkey-themed slot machine game teems with jungle dwellers, free games, and plenty of wild monkeys.

All Bragg HUB partners can access Monkey Mania and participate in social gaming via Whow.

GAMOMAT founder Dietmar Hermjohannes stated that the Gaming for the Climate Initiative and Book of Oasis had a considerable impact. Monkey Mania was the perfect fit to expand the project and supports the company's efforts in fighting climate change. The Borneo Orangutan Survival Society (BOS) is a tremendous organization that he and company stakeholders are grateful for, end quote.

GAMOMAT is a German-based online casino games developer. The company focuses on offering an excellent experience for slot players. GAMOMAT started as a successful land-based business. However, in 2005, GAMOMAT began to develop innovative iGaming titles. As a result, GAMOMAT now has over 150 online slot games fans can play for real money and social casino verticals. These outstanding titles are available in more than 35 languages and can be enjoyed by players worldwide. Over 70 gamers love gaming and developed each GAMOMAT release.