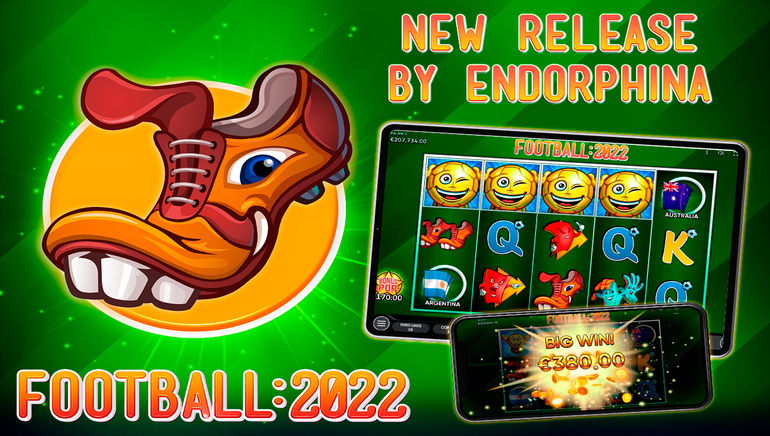 Football:2022 is the latest slot from Endorphina, a themed game with unique mechanics, a bonus game, and a progressive mystery jackpot feature.

The entire world is anxiously waiting for the FIFA World Cup, scheduled to start on November 20 in Qatar. Endorphina has just unveiled its latest slot game called Football:2022 players can enjoy at leading casinos. The game is an excellent opportunity for football fans to gear up for the excitement of the most important tournament in the world. It has arrived just in time for the huge global event and will appeal to football enthusiasts and slot fans.

The Latest Sporty Slot from Endorphina

The software developer has a tradition of producing sports-themed games, and Football:2022 is just the latest and most exciting slot. It encourages punters to put on their game faces and spin the slot's reels that capture the very essence of the beautiful sport. They can choose their team and compete in matches to unlock unique rewards guaranteed to spice up their gaming sessions.

Football:2022 gets you on the playing field in style with a game with five reels, three rows, and a total of 10 fixed pay lines. The symbols populating the reels are in complete accord with what sports fans would expect from a football match. You will have yellow and red cards, football shoes, timers, and a handful of football emojis.

The football cup was chosen as a wild symbol, so it is a pleasant sight because it can substitute nearly all the other images across the reels. Scattered symbols and flags are the exceptions, but winnings are doubled whenever the wild symbol pops up in a combination. This means that players hit two birds with one stone when the football cup appears, bringing a valid reason to celebrate.

Powerful as the wild symbol might be, it is not the most important in Football:2022. The scatter symbol can appear on the first and fifth reels, and when they do they usher in the penalty bonus game. The scatters feature flags from the 32 participating countries and you will play for the one that pops up on reel one. Your opponent is the software, who fights for the country whose flag is on the fifth reel, so this minigame creates a real sense of competition.

The player takes the penalty kick first, and regardless of the outcome, the computer will do the same immediately after. Each time somebody scores a goal, it is displayed on a unique scoreboard, and you win prizes when you score and when you save a goal. At the end of five penalty rounds, the game concludes, and if you score more goals than your opponent, you claim the entire prize.

Football:2022 also has a progressive mystery jackpot feature, which grows each time players make an eligible bet. The jackpot draw can start when least expected, and it is random, so there is no needed action on your part. This slot also has the Bonus Pop feature, so many surprises are in store.