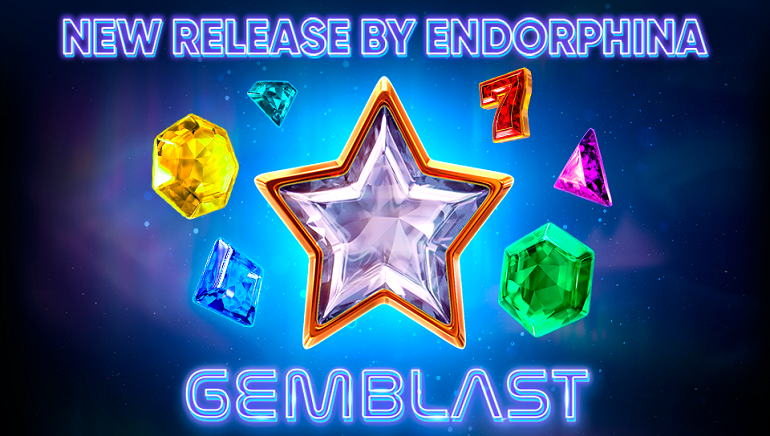 Following in the wake of Cupid and Golden Ox is Gem Blast – another brand-new video slot that has released from Endorphina in 2021.

Inspired by the majestic Aurora Borealis light show that takes places around the Arctic Circle, Endorphina has created a new video slot called Gem Blast. This is available from late February 2021 at participating online casino sites that are powered by Endorphina, and it will be instantly compatible with HTML5 operating systems, including Android, Windows, and Apple.

Gem Blast is a five-reel slot in which players can win both ways across the 10 adjustable paylines. The symbols are gems and they can be matched from either the leftmost or the rightmost side of the five reels. The paylines can be changed by tapping the “LINES” button, while the coin value can be adjusted from €0.01 up to €1.00.

With all paylines active, the minimum value per spin can be €0.10 while the highest is €10.00. There is a turbo option to make the gameplay faster, while the “AUTO” button instructs the slot to keep spinning until the “STOP” button has been pressed.

Although there are not any scatter symbols or free spins, there are wild symbols. These are symbolised by stars that can be landed on the second, third, or fourth reels. The star wilds are intended to expand and cover a reel. They can also trigger re-spins and it is possible to obtain three at the same time.

Gem Blast also features a gamble game in which players can place their winnings at risk for the chance to win more. This entails the player selecting one card at random from four available options. Their aim is to draw a higher card than the dealer and double their winnings.

If successful, this can be achieved up to 10 times in a row. However, any defeat to the dealer will cause the player to lose all of their winnings from that round. In this mini-game, the RTP has been tested as 84.00%.