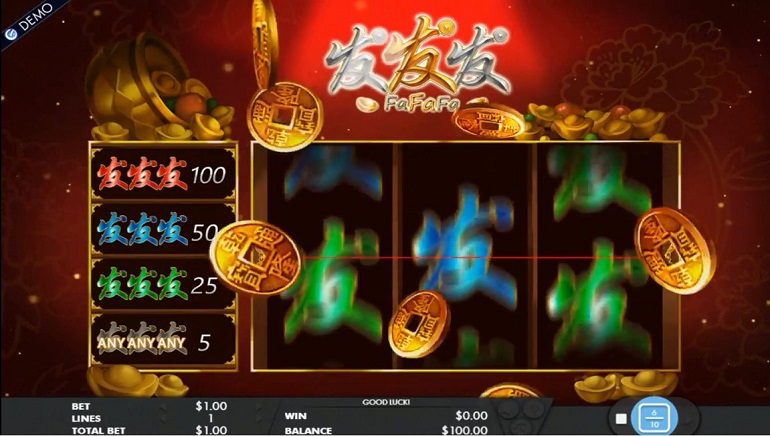 With three new games to be released in 2018, Genesis Gaming encompasses a nice variety of themes and features, catering to different players' tastes.

Genesis Gaming will be entering the new year in style, with no fewer than three new slot machines for players to enjoy. The company decided to mix things up a bit, so all three new games are bound to offer a memorable experience and cover a wide range of different gaming tastes.

A majority of new games we see these days feature flashy graphics, modern sound themes, and entertaining bonus features. However, classic slots never really go out of style and Fa Fa Fa slot by Genesis should once again confirm this.

Fa Fa Fa features the old three-reel setup with just a single payline across the middle of the screen. Symbols are represented by the same Chinese letter but in three different colors, and players will want to see three of the red ones lining up across, as this combination pays 100x the bet.

Also equipped with sound effects mimicking a land-based casino experience, Fa Fa Fa slot will offer players a proper trip down the memory lane. It is worth mentioning the game features an RTP of 97.1%, so this one should provide a lot of play even if you're playing on a budget.

Be a Hero for the Day with Fire & Ice Island Slot

Inspired by the manga tradition, Fire & Ice Island gives players a chance to experience the excitement of playing the role of the protector of a mysterious treasure chest that gives its owner a power to control Earth elements. It is your task to stand against the villains who'd steal this chest and use it in various villainous ways.

Fire & Ice Island slot features 243-ways to win and a host of features in the base game as well as a free spins bonus round. These special in-game features are called "attacks" and they increase players' winning chances by adding different types of wild symbols. During the free spins round, one of the three features is active.

Da Hong Bao comes equipped with 50 paylines across five reels and three different free spins features, depending on how many scatters land on the reels (three, four, or five). These features are called Lucky, Fortune, and Dragons spins, and they offer progressively better winning chances. During all features, all wins containing wilds are doubled.

With these three new slots in the pipeline, Genesis Gaming is set to kick off the new year in style and by the looks of it, players have a lot to look forward to as all three of these games have something unique and exciting to offer. Expect to see the new slots in 2018 at online casinos powered by Genesis.