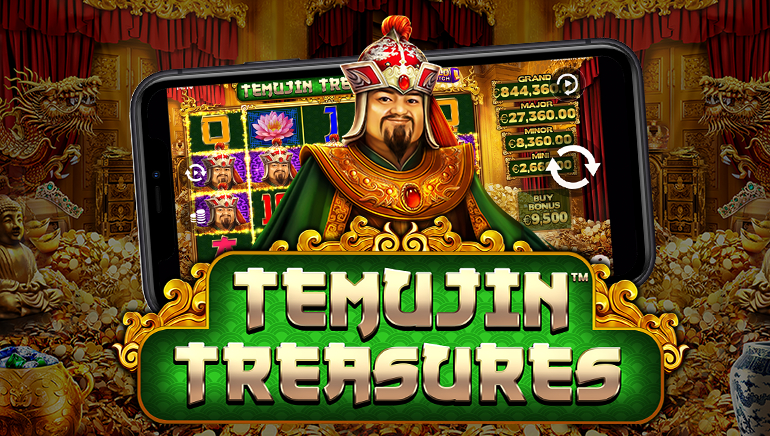 Pragmatic Play has launched a new slot for March 2021. Entitled Temujin Treasures, the newly released slot is named for Genghis Khan, who is also known historically as Temujin. As the name would indicate, this is a historic slot in theme, though it’s one that can provide a range of features.

Developed by Wild Streak Gaming, the Temujin Treasures slot has been released at participating casino sites that are powered by Pragmatic Play. Produced with five reels, the slot is compatible with mobile or desktop devices. Visually the slot is quite basic, though it does provide special features to broaden the experience.

Regarding wagers, it is possible to stake from €0.38 up to $190.00 on each spin. Although highly volatile in nature, the players who succeed can generate high multipliers when the more rewarding symbols are aligned in adjacent reels from the left to the right of the screen. Rather than include paylines, Wild Streak makes it possible for plays to win in 1,024 different ways.

A golden tiger has been designed as the wild symbol. While it can’t substitute for the bonus or firecracker symbols, it can be used to fill in for all of the other symbols and it can potentially land on the second, third, or fourth reels. When six matching symbols appear on the second, third, and fourth reels, this triggers the Wild Switch feature and causes all of the images to transform and become wilds.

Temujin Treasures will also provide the Wheel Bonus round, which can be initiated with three bonus symbols on the second, third, and fourth reels. A fortune wheel shall appear during the feature and will provide opportunities to win free spins or else one of four progressive jackpot tiers. The current values are displayed on the screen and include the Mini, Minor, Major, and Grand levels.