Get a Hit of Endorphina’s New Diamond Vapor Slot 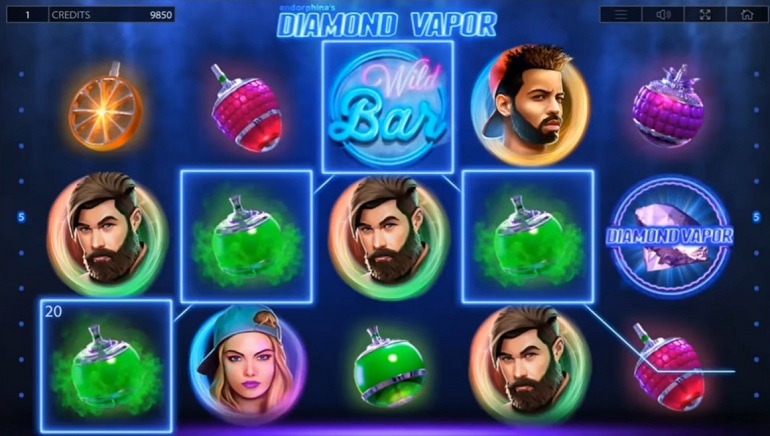 Diamond Vapour has arrived at Endorphina casinos as the world’s first vape slot – find out all the details here.

Bars and nightclubs gradually saw the emergence of people smoking electronic devices called vapes towards the end of the ‘00s. Since then, vaping culture has soared because of people trying to find a healthier way of smoking.

Inspired by the rise of vaping culture, software studio Endorphina has decided to get ahead of the game by developing the world’s first vape slot. This is entitled Diamond Vapor and it will be available at Endorphina casinos such as BETJOY Casino, Loki Casino, and Oshi Casino from March 2017.

Diamond Vapor has been promoted with a poster that is fronted by a scantily clad blonde woman who is exhibiting tattoos and puffing on a vape. In the background, she is flanked by two bearded men who combine hipster grooming with street clothing.

All three of the characters from the poster make their respective appearances as symbols in the Diamond Vapor slot. Then, there are vapes and juice bottles used to fill out the symbols, while bonus and wild symbols have also been included to reward players.

The slot interface is quite standardised in its design of using five reels by three rows, which means it can display 15 total symbols for every spin. In regard to winnings, players will have the ability to match symbols over Diamond Vapor’s 10 payline.

Vape Bar is one of the most rewarding symbols because of its dual function as wild and scatter. After landing three Vape Bars anywhere on the screen, players will have 10 free games plus the ability for symbols to expand and cover entire reels when they come together on a winning payline.

This is not the first time that Endorphina has explored strange themes, having previously released the world’s first Bitcoin slot. Satoshi’s Secret has long been a staple of Endorphina ever since it was launched.