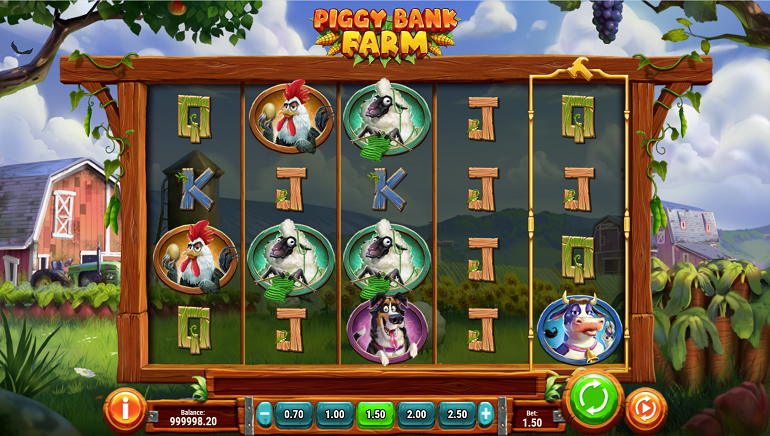 Play’n GO’s new slot, Piggy Bank Farm, has a seemingly-mellow theme that belies a highly volatile game packed with 2 special features that can lead to a maximum payout of 5000x the stake.

Play’n GO’s new slot, Piggy Bank Farm, has a seemingly-mellow theme that belies a highly volatile game packed with 2 special features that can lead to a maximum payout of 5000x the stake. While a rural, farm-themed slot may not sound too exciting, Play’n GO has succeeded in breathing some life into it with enticing graphics, a banjo-filled soundtrack, and features that can be re-triggered.

Piggy Bank Farm is a 5-reel, 4-row, 50-payline slot that’s playable on all devices. While putting money in a piggy bank is usually considered a safe bet, this slot is highly volatile. The default RTP is 96.29% and the volatility ranks 8/10 on the developer’s scale. Bets range from $.10 to $100, making it appealing to players of varying-sized bankrolls.

Symbols include 10-A royals and animals that are full of character, including a smiling dog, knitting sheep, skeptical rooster, and a proud cow. There is also a farmer wild that pays out 50x the bet for 5 of a kind and a gold coin scatter.

When 3 scatters land on the reels, players get 8 free spins. During this round, the hammer symbol can land on any reel to trigger Piggy Bank Spins (see below). If more than 1 hammer lands, the feature gets a multiplier added, up to x10. The Free Spins round can be re-triggered if 3 additional scatters land at the same time.

Piggy Bank Farm may not promise much in terms of title, but it’s a pretty decent slot that includes two major special features. The graphics and sound are done well, making it one of the more appealing farm-themed slots out there. The high volatility and placid theme make for an interesting juxtaposition. The maximum win is 5000x the bet, not a huge takeaway but not bad for a piggy bank.