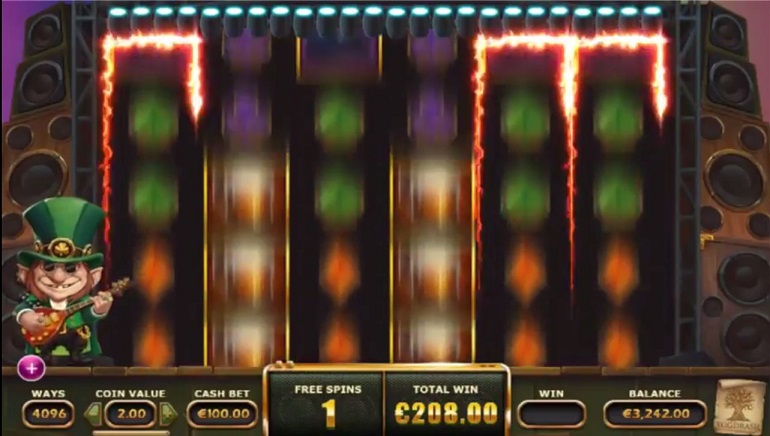 Coming to us from Yggdrasil is a new rebellious slot named Rainbow Ryan, and it will have you shake your head in rhythm with the tunes as you spin the reels. Featuring small but strong-headed leprechaun Ryan and awesome music, this is the game for all true hard rock fans out there.

The first thing that will get your attention with the Rainbow Ryan slot is the great sound background featuring guitar reefs that will make you feel as if you were at a proper rock concert instead of playing at an online casino.

Ryan, a small and funny leprechaun with impressive jamming skills will accompany you on your adventure, celebrating your wins with some powerful solos, building upon a rather original theme of this slot.

Rainbow Ryan is an interesting mix of a modern music-themed game with traditional Irish motives. Hence, the symbols you'll encounter on the reels include pots of gold, stylized leprechaun boots, microphones, and more. Even Ryan himself rocks the classic leprechaun outfit combined with cool sunglasses and a guitar-like instrument. If you didn't think anyone could pull this style off, think again!

Unlike most casino slots, Rainbow Ryan features a 6x4 grid, opening doors for more winning possibilities. There are no paylines as such since winning symbols only need to be on consecutive reels to pay, regardless of their positions the reels.

The games' main feature is Rainbow Reels, which triggers randomly, and it will synchronize anywhere between two and all six reels, for a massive winning potential.

If you get lucky and land at least Free Spins symbols, you'll enter the free spins bonus round where at least two reels will be synced on every spin. Of course, Ryan can still wake up at any time to pull off one his amazing solo riffs, synchronizing additional reels. All said and done, if you're lucky enough, Rainbow Ryan can pay up to €510,000 on a single spin, which is very impressive for a non-jackpot slot.

People from Yggdrasil have really done an amazing job with the Rainbow Ryan slot, especially in how they managed to get awesome rock 'n' roll tunes to work perfectly with the visuals. But, don't take our word for it. The game should be available at a number of Yggdrasil-powered casinos, so you can start jamming it up with Ryan right now!