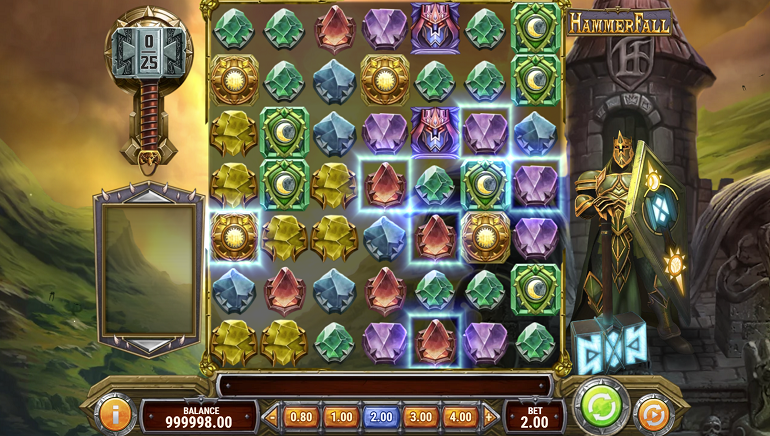 Hammerfall is an epic heavy-metal-themed slot from Play’n GO that celebrates the music of the famous Swedish metal band, Hammerfall. Hammerfall is a 7x7 grid that pays out when clusters of 5 or more matching symbols connect, known as Clusterpays.

Hammerfall is an epic heavy-metal-themed slot from Play’n GO that celebrates the music of the famous Swedish metal band, Hammerfall. The band’s songs take center stage, making this game attractive to a fairly niche audience, but fans of Metallica and other metal bands will likely get a kick out of it too.

While the soundtrack speaks for itself, the features can hold their own too. Super Tiles, Lightning Wilds, and a ton of modifiers ensure that there’s a lot of action in this game. Hammerfall is available at Play’n GO casinos, online and on mobile. No earplugs allowed!

Hammerfall is a 7x7 grid that pays out when clusters of 5 or more matching symbols connect, known as Clusterpays. When a win is scored, the participating symbols vanish and make room for more symbols to cascade down. At the same time, every win charges the Hammer Meter, which can lead to some special features (read more about them below).

Symbols include 5 gemstones in various colors, moons, hammers, suns, and Hector (the band’s mascot). Hector is the highest-paying symbol, awarding 500x the bet for clusters of at least 15 symbols. The band’s logo is the game’s wild, and in different rounds of the game, Lightning Wilds come into play too.

Super Tiles, randomly highlighted positions that appear behind symbols, can trigger Lightning Wilds when they are included in a winning combination. Lightning Wilds are sticky when used in a win and come with a multiplier up to x3.

When 25 winning symbols have been collected in the Hammer Meter, the Song feature is triggered. This feature can apply one of 3 modifiers (named for Hammerfall songs):

If 50 winning symbols are collected in the Hammer Meter on one spin, the Hammer High feature is triggered. This super-cool feature applies all modifiers to the reels.

On a non-winning spin, one of several different modifiers can be randomly triggered. These include:

The way that Play’n GO chose one band and made an entire game from it is impressive, and the fact that they did it well is even more impressive. Though there is no Free Spins round, the other features make up for it - modifiers, multipliers, extra wilds, and more. Plus, the maximum win of 30,000x the stake per spin can make even the most hardcore rockers do a double take.