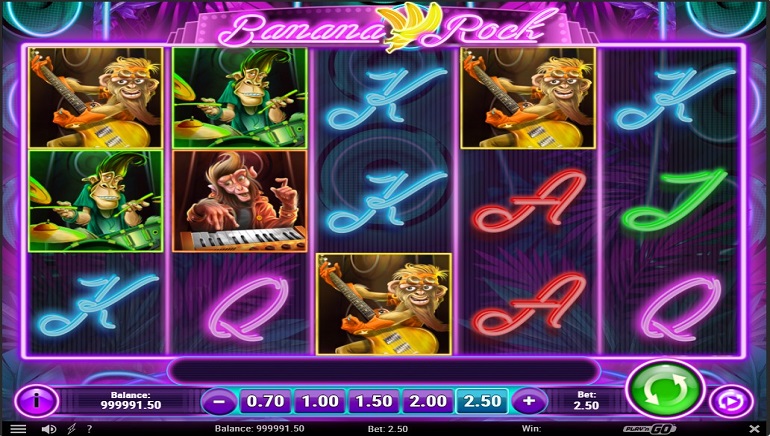 Play’n GO’s new slot game, Banana Rock, is launching today, and it's refreshing to see such a creative theme! Featuring a line-up of 5 monkey band members, players can enjoy a great soundtrack along with respins, free spins, wilds, and multipliers.

Play’n GO’s new slot game, Banana Rock, is launching today, and boy did the developer get creative with this one! Featuring a line-up of 5 rockin’ band members, who happen to be monkeys, in an 80s theme, players can enjoy a great soundtrack along with respins, free spins, wilds, and multipliers.

Banana Rock has 5 reels and 10 paylines, with a minimum bet of €.10 and a max bet of €100. The slot is fairly volatile and has a default RTP of 96.60%. Winning combinations are scored when 3-5 matching symbols appear across any payline.

Reel symbols include the letters A, K, Q, and J, along with 5 high-paying symbols that each feature a band member. There are 2 wilds, a standard one and a lead singer wild. There’s also a Banana Rock logo scatter that appears on reels 1 and 5.

When 2 or more wilds land on any spin, the Rock ‘n’ Rolling Respin feature is triggered, during which the lead singer dances across the reels and leaves a trail of wilds after him.

When 2 scatters land on the reels, the Free Spin mode is triggered, which awards you an instant 10 free spins. The goal of the Free Spin mode is to collect band members by landing their stacked symbols on the reels. Every time you get a band member symbol, the power meter rises and a multiplier is applied to any winning combination that includes that band member. Multipliers range between 2x-5x your stake, and can be applied to each of the 5 members.

Once your 10 free spins are up, the Encore Spin mode kicks in, which features only the band members on the reels and guarantees a win. Multipliers from the Free Spin mode are added together and applied to any win you score during the Encore Spin, with the potential to reach a multiplier of 25x.

Play’n GO really went out on a limb here with such a bizarre, offbeat theme - and it was totally worth the risk. The members of Banana Rock are endearing and the music has a feel-good beat. The main attraction of the game is the Free Spin mode, so aim for that and the 25x multiplier that's up for grabs. Banana Rock can be played at Play'n GO casinos, online and on mobile - check it out today!