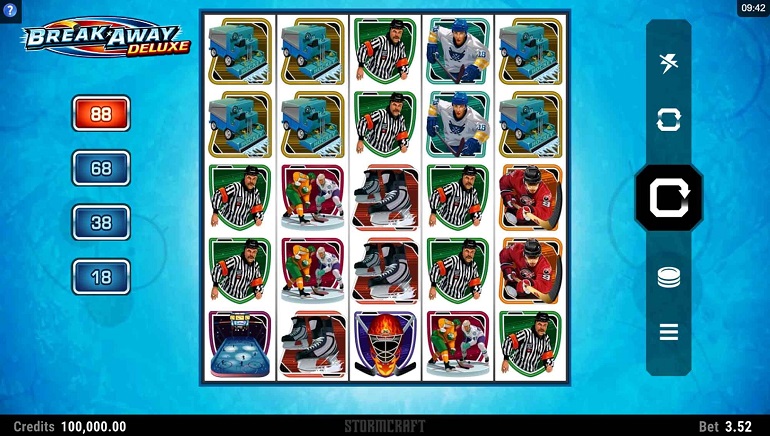 Ice hockey fans will not be disappointed with the latest big play from Microgaming Studios – Break Away Deluxe. This blistering slot machine game has fans hitting the back of the net in double-quick time with lots of powder off the rink!

Break Away Deluxe follows hot on the heels of the smash-hit sensation, Break Away by Microgaming. This sequel marks the much-anticipated debut of this ice hockey slot sensation. Developed in tandem with Stormcraft Studios, this action-packed game brings plenty of adrenaline-loaded activity to the screen.

Stormcraft Studios has already developed multiple industry-leading titles such as Dragon Shard, Agent Jane Blonde, and Fortunium. Break Away Deluxe ramps up the action to a whole other level. This volatile slot machine game plays out at breakneck speed, with a 5 x 5 grid of Rolling Reels™, and a choice of selectable paylines (18 lines, 38 lines, 68 lines, 88 lines). As the number of lines in play is increased, so too is the winning potential. Players can win up to 3200X their initial bet in Break Away Deluxe.

Break Away Deluxe also features super stacked wilds. These make scoring easy, and they form on reel 3, reel 4, and reel 5. The Smashing Wild™ can generate guaranteed wins when it turns reel 1, 2, or 3 wild. When players land 3+ scatter symbols on the reels, the ice rink comes alive with 12 free spins. Players can enjoy big winnings with up to 8 X multipliers. With growing wilds™ on reels 2 - 5, wild stacks are increased by 1 with each additional spin. This boosts the tempo of the game. Break Away Deluxe is geared towards mobile players on Android and iOS devices.