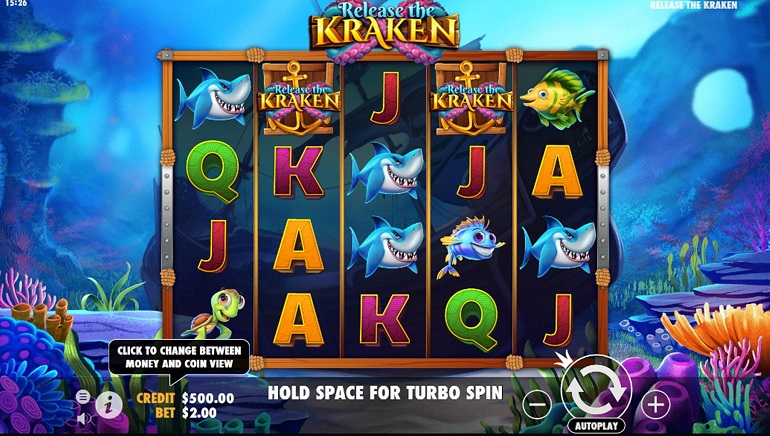 Release the Kraken is an exciting new online and mobile slot from Pragmatic Play where a fearsome monster gives players the chance to grab hold of the top payouts.

Themed around a fearsome sea monster, Release the Kraken is a new online slot from Pragmatic Play. The Kraken is the star of multiple bonus features, including rounds with locking wilds, spreading wild symbols and more.

Reels On The Reef

This is a 5-reel, 20-line game set against a backdrop of corals and sunken ships. Alongside the playing card icons, players will see fish, turtles and a smiling shark on the reels of this cartoon-style game. The Release the Kraken logo and wild symbol return the highest prizes, with 2,500 coins claimed when either fills a payline.

Colossal Kraken wilds can fill a 3x3 block on the reels, unlocking some big wins, while Infectious Kraken wild symbols spread out across the game.

Players also get to enjoy a free spins bonus round, where the number of paylines expands from 20 to 40. Each wild that appears during the bonus games locks in place and increases a win multiplier by 1x. It's possible to win up to 10,000x the stake during this round.

Release the Kraken is a high volatility game with average returns of 96.5%. The game is fully compatible with desktop PCs, smartphones and tablets, and players can stake between 0.20 and 100.00 on each spin of the reels.

Commenting on their latest game, Melissa Summerfield, Chief Commercial Officer at Pragmatic Play, said: “Release the Kraken is the fourth game we’ve launched this month, representing yet another precious addition to the Pragmatic Play slot portfolio.

“With its immersive setting, thrilling gameplay and giant win potential, we are sure players will be battling the fearsome Kraken in search of its treasure.”