Get Your Claws Into The Golden Tiger Slot From iSoftBet 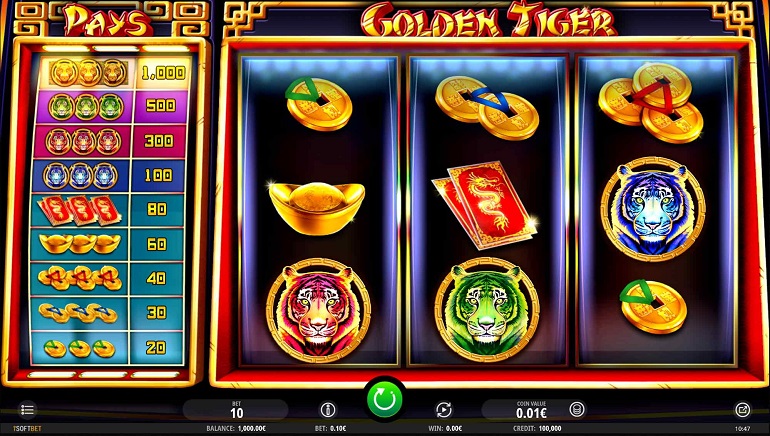 Golden Tiger is a new 3-reel slot that features symbols of luck. Players will hope to strike luck with bonus wheels that can spin up win multipliers.

The Golden Tiger slot from iSoftBet roars into online and mobile casinos, where the classic Asian theme and exciting gameplay should ensure that it earns its stripes.

Take On The Tigers

Golden Tiger is a classic 3-reel slot machine with 5 paylines running across the game. The aim is to match symbols across any line to win a prize. The traditional fruit machine layout extends to the paytable being visible next to the reels, although the detailed symbols and richly-designed surroundings help the Golden Tiger slot to stand out from most other 3-reel games.

Symbols include lucky coins, golden bowls and red envelopes. Blue, red, green and golden tigers take up the top part of the paytable. Lucky players who land the golden tiger across a line will claim a prize of 1,000 coins.

If all 9 spots on the reels become filled with the same symbol, players win across all 5 paylines and the whole prize is doubled in value. If the golden tiger fills the screen, once the payout has been made, special bonus wheels are activated.

Two bonus wheels spin. One contains high-value symbols from the game, while the other is filled with multipliers of up to 10x. Once they have stopped spinning, whichever symbol on the first wheel is next to a pointer will pay out, multiplied by the number highlighted on the second wheel.

Meet The Tigers On Any Device

iSoftBet has designed the Golden Tiger slot to work on desktop PCs, iPhones, iPads and Android devices. Players can choose stakes of between 0.10 and 10.00 per spin. Golden Tiger is a medium volatility slot with a declared return to players percentage of 95.95%.

Based in London an Luxembourg, iSoftBet provides online and mobile games across multiple regulated markets. The range is licensed in the UK, Italy, Spain and Belgium among others.