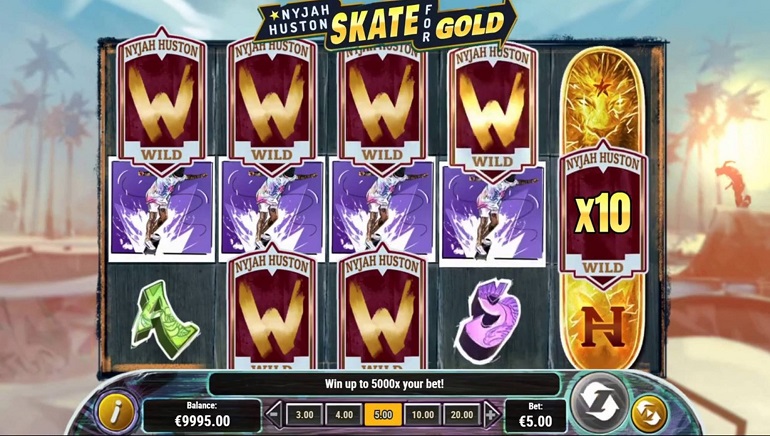 Nyjah Huston - Skate for Gold is a new slot from Play'n Go themed around Skateboarding. It features the biggest star of the sport in his own game.

The world's biggest skateboarding star features in a new slot from Play'n Go. Nyjah Huston - Skate for Gold is a 5-reel, 10-line game filled with images of Huston on his board against a backdrop of a Skateboarding park. It comes with features such as extra wilds, multipliers, and free spins.

Along with several high-value symbols of Huston performing a variety of tricks, the Nyjah Huston - Skate for Gold slot uses graffiti-style letters S, K, A, T, and E icons. A wild symbol helps to complete combination by acting as others if needed.

A Wildboard feature can trigger in any spin. Above the reels, a Combo Meter displays certain skateboarding tricks. If the same trick appears as a symbol on the reels, it launches an in-game bonus. An animation of Nyjah skates across the reels, leaving a trail of wild symbols behind him. One of the wilds expands across its reel, and could transform into a golden Wildboard that multiplies any wins by up to 10x.

Skate Your Way To Free Spins

If the lower value symbols spell out S, K, A, T, and E across the reels, they turn gold and launch a free spins bonus round. 12 games play out, during which 3 trick symbols in the right places will trigger Wildboard Respins. As well as the potential for an expanding wild and multiplier, it also adds 2 extra spins to the total.

Play Online And On Mobiles

The Nyjah Huston - Skate for Gold slot has been designed to work across desktop and mobile platforms. Players can spin the reels for stakes of between 0.10 and 100.00, with wins reaching a potential of 5,000x the total bet. It's a medium variance game where average paybacks are 96.2%.

You can enjoy the Nyjah Huston - Skate for Gold slot from 2nd July 2020.