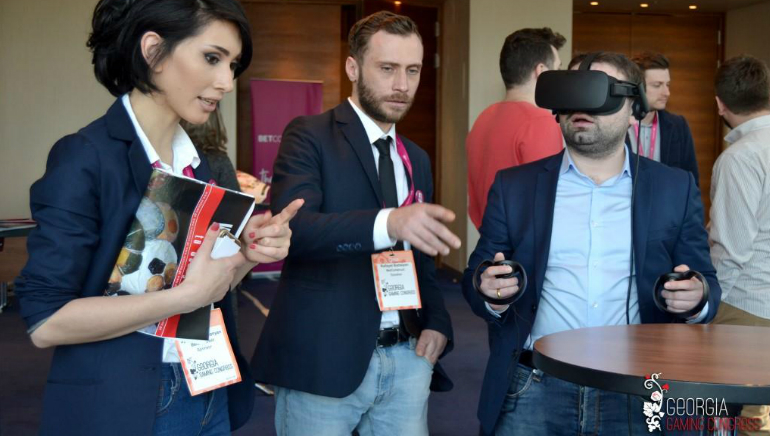 The mysteries of the Georgian iGaming landscape were solved, so let the business begin!

The Georgia Gaming Congress 2017 came on with a roar, and left us with a bang.

On March 1, some of iGaming’s most reputable experts converged in Tbilisi to discuss the latest developments and trends in iGaming, while exhibitors wowed all in attendance with their advance gaming products.

Among the 200 people industry players in attendance in this relatively intimate networking setting, one quarter of them were top managers representing large companies.

With no small amount of anticipation palpably hanging in the air, the event was kicked off by representatives of event sponsor BetConstruct representatives Rafayel Badalyan and Oksana Yanyshyn.

BetConstruct’s dynamic duo spoke gleefully to the eager and responsive audience about two iGaming phenomenons: the incoming iGaming revolution being sparked by the arrival of full-scale virtual reality VR technology; and the commercial benefits of live dealer games.

Badalyan and Yanyshyn’s quoting of exciting data such as live casino holding the potential to increase the number of website users by 100% and revenues by 70% was met with enthusiastic cheers from the audience.

A great interconnection was bridged between the government and operators as well, as Georgia Revenue Service member Teona Shiukashvili welcomed the crowd by spelling out the nuances of gambling business taxation in the country, breaking down the system across the country’s separate regions of jurisdiction to the delight of the intrepid audience.

Betsense CEO Zakaria Khitarishvili’s presentation on increasing engagement of players was a big hit as well, as was Sentanta sports TV channel founder Lasha Machavariani’s advice to a packed house on doing gambling business in the country which illustrated the differences between the Russian and Georgian markets.

Perhaps the biggest cheers of all however went to Bitcoin Embassy Georgia Alex Sudadze’s presentation on the benefits of cryptocurrencies for gambling companies, which gave the audience a great practical look into the technology that underlies the digital currency system, which has increased the speed of monetary operations and player trust.

In addition to the advanced technologies on the demo floor, visitors also were refreshingly surprised by the innovative online business solutions featured there.

After GGC 2017, the Georgia market looks as ripe as a peach, literally bursting with sweet opportunities!