Go for the Gold with Thunderkick's New Slot, Beat the Beast: Griffin's Gold 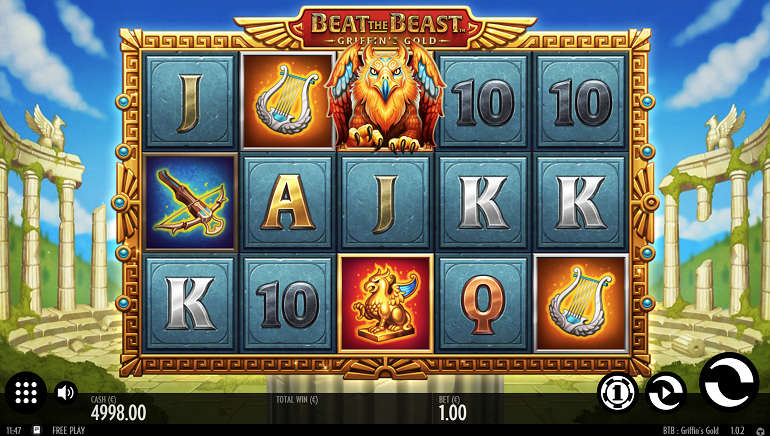 Beat the Beast: Griffin's Gold is a simple, high-performance slot by Thunderkick that includes powerful features like free spins, roaming wilds, and multipliers.

Beat the Beast: Griffin’s Gold is the fifth and final slot in Thunderkick’s Beat the Beast series. It offers bigger wins than all its predecessors but it’s easily discernible as part of the pack. Griffin's Gold isn't heavy on the features, with just a Free Spins round on the table, but during that round multipliers and roaming wilds combine to offer a maximum payout of 22,222x the stake. Check it out at Thunderkick online casinos.

Beat the Beast: Griffin’s Gold is a 5-reel, 3-row, 9-payline slot that’s playable on all devices. The grid is set in the center of an ancient temple with green grass and blue skies in the background. Bets range from $.10 to $100 per spin and the math model is highly volatile. The RTP is a bit above average at 96.14%.

Low-paying symbols include 10-A royals, then there are higher-paying symbols that include a crossbow, feather, lyre, Griffin statue, and Griffin. There is also a Griffin emblem symbol that acts as both wild and scatter.

If 3 Griffin emblems land, the Free Spins round is triggered. Players receive 10 free spins plus a payout of 2x, 20x, or 200x, depending on how many scatters landed. During the free spins, a new roaming wild appears. When 1 lands, it stays on the reels for the duration of the free spins. Before each spin, it moves to an adjacent position.

Roaming wilds come with a multiplier that starts at 1 and increases if the wild is used to create a win. If a win occurs with more than 1 roaming wild, their multipliers are multiplied together, resulting in a potential maximum of 125x. Also, if a roaming wild creates a win, players get 1 additional free spin.

Beat the Beast: Griffin’s Gold is a simple, high-performance slot that is built around the Free Spins round, which comes with the heavy-hitters of roaming wilds and multipliers. The maximum payout is 22,222x the total stake, not a bad takeaway for a slot that’s not feature-rich. It’s also a higher maximum payout than any other slot in the Thunderkick series, though you don’t need to play the others to get the most out of this one.