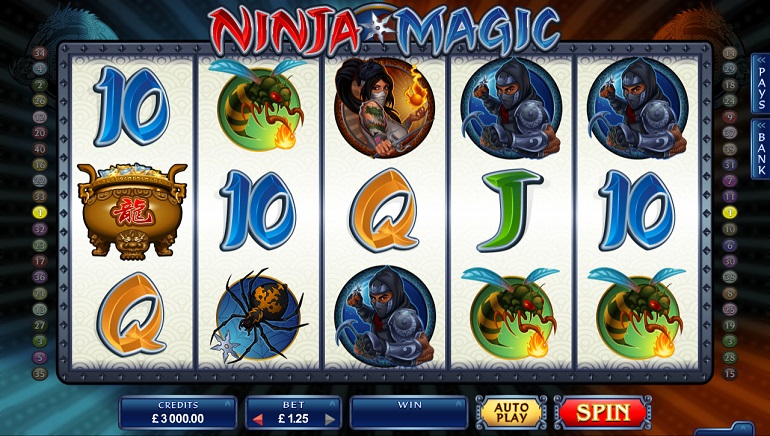 At Golden Riviera Casino, June 2016 has seen the release of three brand new slot games in the form of Ninja Magic, Pretty Kitty, and Shoot! Each title has been developed by Microgaming and has something different to offer players, who are now able to play them.

Ninjas give the chance for scintillating excitement, given their elite martial arts skills and embrace of stealth-based action. In Ninja Magic, Microgaming has designed a mystical adventure in which players can create winning symbol matches over the 40 paylines on the five by three rows.

While battling gruesome spiders and insects, players can land three or more scatter symbols to be rewarded with 40 free spins and up to an 8x multiplier. The wild symbols can be extremely helpful when they fill in for any that are missing. Then there is the Ninja Magic Bonus Games where yet more winnings can be secured.

Pretty Kitty is tailored towards players who love cats and have a sophisticated eye for style. The array of symbols combines cute cat pictures and jewellery images that can land on the five reels and three rows. All in all, there are 243 ways for players to win.

To help players out, game developer Microgaming has integrated wilds, stacked high symbols, and expanding symbols. Within the slot, there will be 15 free spins if players land the stacked wild symbols on reel one. Ultimately, Pretty Kitty has a 70,000-coin maximum jackpot.

Summer 2016 has three major football tournaments in the shape of Euro 2016, the Copa America, and the Olympic Games. For fans, Shoot! is the ideal companion slot for this summer of football. There is also added depth in that the game is branded based on the popular football magazine Shoot! from yesteryear.

Shoot! follows a similar formula to Ninja Magic and Pretty Kitty, as it has been made with five reels and three rows. However, it varies the paylines by including 50 different prospects. Wild and scatter symbols have been included, with players able to unlock free spins and the Magazine bonus round. Players can try to Shoot! now over at Golden Riviera.