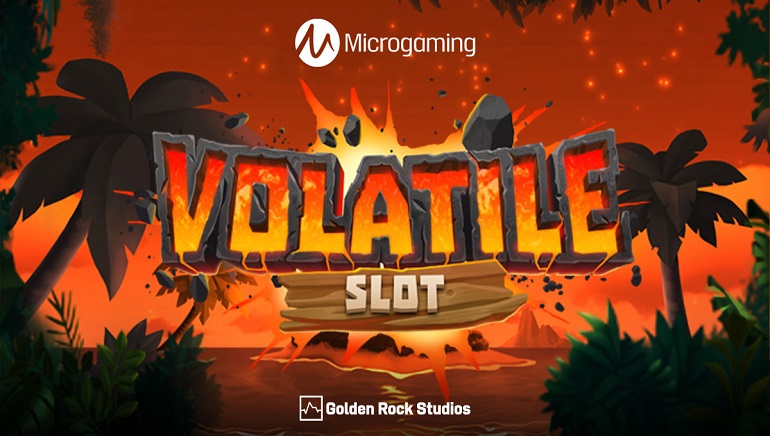 Volatile Slot is the first game to be released by UK-based iGaming developer Golden Rock Studios exclusively at Microgaming casinos.

Golden Rock Studios is the very latest developer to secure an exclusive supply deal with Microgaming. As part of the fledgling arrangement, Golden Rock has delivered Microgaming casino sites with a brand new release in the form of the freshly debuted Volatile Slot. This is the first of more titles from the UK studio, established by James Curwen and Will Mathieson.

Volatile Slot is the very first video slot to be developed and released by Golden Rock. Made with five reels and three rows, there are 15 symbols and the ability to secure winnings from 10 paylines programed to pay out from left to right in a sequence.

The see-through background of the slot interface allows for players to look out to an island with a volcano on top. The visuals are distinctly tropical and the screen can shake for effect. Anyone brave enough to take on the natural phenomenon can do so on a variety of desktop or mobile devices, including Android and iOS, at Microgaming casinos.

Golden Rock has added a number of special features to the base game offering. With Volcanic Wilds, these symbols hold the ability to appear on the second, third, or fourth reels. Once in place, Volcanic Wilds can substitute for symbols that are absent.

In some cases, the Volcanic Wilds will become restless and shall change into Exploding Wilds. After an explosion, each symbol shall reveal a multiplier valued at 2x, 3x, or 4x. These can combine with other Exploding Wilds up to a maximum 64x for securing three all at the same time.

Frenzied Free Spins round off the special features and can be obtained when three wilds are placed on the screen simultaneously. The outcome shall be 10 free spins and the more frequent appearance of both Volcanic Wilds and Exploding Wilds.