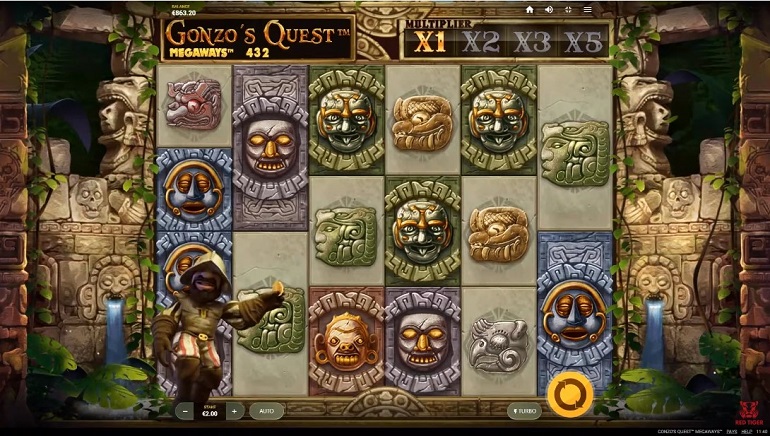 Gonzo’s Quest™ Megaways™ is the follow-up to the beloved NetEnt original. Avalanche™ multipliers and Free Falls are now complemented by Megaways and Earthquakes.

Gonzo’s Quest has been one of the most played video slots at NetEnt casino sites since launching in 2011. And nearly 10 years went by until Red Tiger Gaming was entrusted with improving on the original Gonzo’s Quest slot. From July 2020,  the Gonzo’s Quest™ Megaways™ slot will be accessible on desktop and mobile devices at participating NetEnt casinos.

Since September 2019, Red Tiger has operated as a subsidiary studio of NetEnt, having been acquired by NetEnt in a £220 million (€240 million) acquisition. While Red Tiger isn’t the creator of the Megaways concept – it’s actually Big Time Gaming – the studio has used the trademarked feature in several other slots, including Piggy Riches, Golden Leprechaun, and Dragon’s Fire.

The remastered Gonzo’s Quest Megaways slot now has six reels and seven rows rather than the original layout of five and three. The exact symbol configuration can change, however, with some filling multiple positions. This means that the number of Megaways (or ways of winning) change randomly on each spin, with the maximum being 117,649 and wagering starting from €0.20.

NetEnt’s Avalanche™ feature makes a return to reward players on consecutive wins. A sequence of four Avalanches can trigger a 5x multiplier, while this rises to 15x during Free Falls. Essentially, these are free spins and can be initiated with at least three Free Fall symbols (or two plus a wild). The appearance of additional Free Fall symbols during this feature will yield three extra spins each time.

Gonzo’s Quest Megaways can provide winnings of more than 20,000x times the stake. During play, Unbreakable Wilds will help to complete winning sequences across the Megaways and can substitute for every symbol in the game, including Free Falls. Earthquake is the final feature and can shake into life to destroy low-value symbols that will be replaced at random by high-value ones.