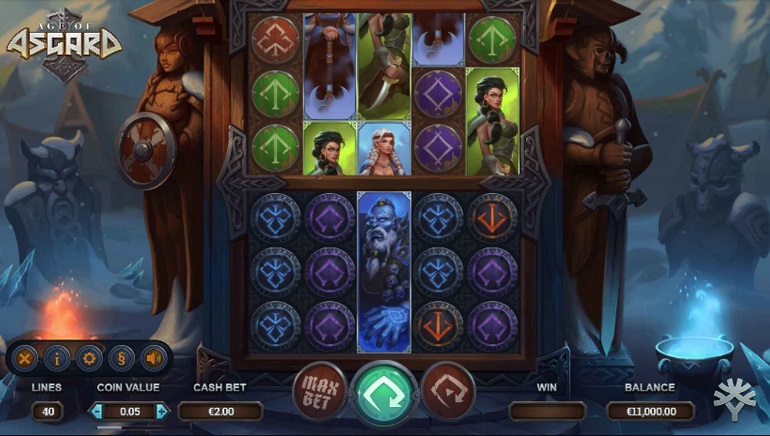 Two slots are combined as one in Yggdrasil’s brand new slot, Age of Asgard, which is compatible on desktop or mobile.

Marvel fans and Norse mythology enthusiasts will recognise Yggdrasil’s new Age of Asgard slot as being a legendary haven for the gods. In Norse mythology, there is a belief that good and evil will one day come together for a final battle, known as Ragnarök. Well, that day will finally come with this slot’s release at Yggdrasil Gaming casinos.

Norse heroes are widely known for being male, but Age of Asgard changes the old story by introducing fearsome female warriors. They star as good characters who appear as symbols on a slot interface with five reels and three rows on the top of the screen.

Interestingly, Yggdrasil has included a second interface of five reels and three rows. This stylistic choice has been taken to accommodate the evil characters and symbols. A total of 20 fixed paylines appear on each, which is reflected in the cost of wagering. If a €0.01 coin value €0.01 is placed, then the total wager is €0.40 to cover all 40 paylines.

Single space wild symbols are programed to land at random, while larger wilds can make an appearance to fill a single reel. In fact, they can nudge into place and become stacked. Following this, the stacked wild remains sticky while a re-spin is played.

The battling nature of the slot becomes apparent whenever stacked wilds appear on the same reel as the good and evil interfaces. This leads to Clash, whereby four random wilds are distributed to cover high-value symbols.

Free spins can be triggered on either the good or evil interfaces with three symbols. Incredibly, this triggers a transition causing the dual interfaces combining as one. This is shown as five reels by six rows and will provide 50 total paylines. Landing five out of the six free spins can also bring the chance to win 1,000 coins from the Randomizer mini-game.