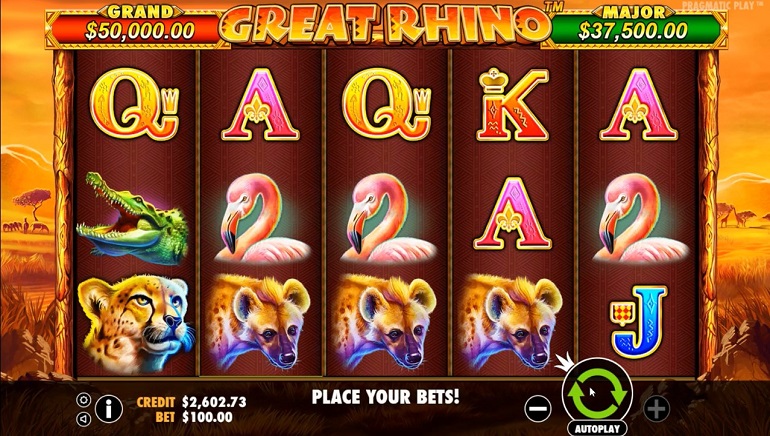 Pragmatic Play casinos have a brand new slot. Check out Great Rhino for the chance to win from progressive jackpot tiers and more.

Pragmatic Play continues to expand its 80-plus catalogue of video slots by holding true to a consistent monthly release schedule. The latest title to be released across Pragmatic Play casinos is the rampaging new Great Rhino slot.

Great Rhino has been designed as a five-reel slot with three rows, and the various symbol positions have the potential to be filled by rhinos, cheetahs, crocodiles, and other types of animal species that are commonly found on the grassy savannahs of Africa.

Another main aspect of the design sees Great Rhino provide players with 20 fixed paylines that winnings can be generated from. When it comes to wagering, the minimum possible bet has been set at $0.20, whereas the absolute maximum for the Great Rhino slot can $100.

Pragmatic Play has designed Great Rhino using an HTML5 architecture, which means that it is responsively compatible over an array of desktop and mobile devices, including the likes of Windows, Apple, and Android.

A feature has been included whereby rhinos can be stacked on the reels. If two or more rhino stacks are created, then this results in the creatures going on a stampede across the screen and initiating Super Respins mode.

In turn, a pool of three respins will also be created. For every new rhino that appears, this will add another respin to the pool. If players can reveal 14 rhinos, then they will win the grand jackpot, while 15 will be worthy of the even larger major jackpot.

Great Rhino also utilises a casino chip wild symbols that has the capacity to substitute for many of the in-game symbols. And then comes the Umbrella Thorn Acacia Tree bonus symbol. The purpose of this symbol is to deliver free spins whenever three or more can be successfully landed on the reels.