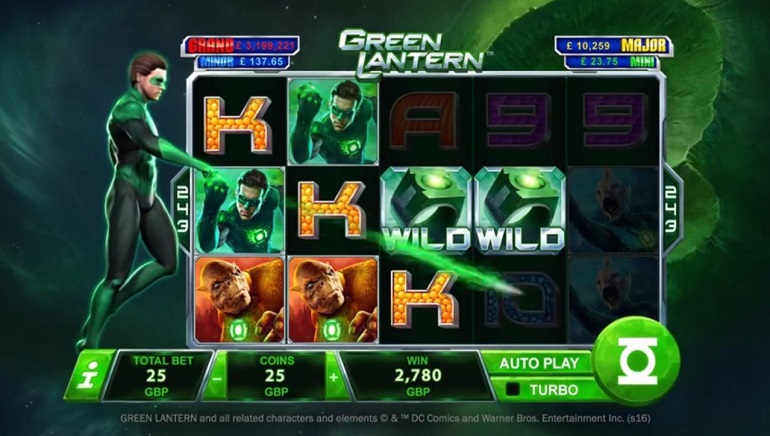 The Green Lantern slot could be set for a January 2017 release at Playtech casinos. Find out what to expect from this new DC superhero slot.

Playtech and Warner Bros revealed an exciting licensing deal at the start of February 2016. After months of anticipation, a number of retro Batman slots were released towards the end of the year. Now it seems that the Green Lantern slot could be next, with January 2017 being a possible release date.

At Online Casino Reports (OCR), we have encountered a lot of industry buzz surrounding the slot in the past few days, which is why we think the release is close. But please stay tuned at OCR and we will update you as soon as Playtech’s Green Lantern slot hits the street.

Playtech’s Warner Bros deal gives the software provider the rights to create video slots based on a number of the movie studio’s most famous properties. In this case, the Green lantern slot is visually based on the 2011 movie that starred Ryan Reynolds as Hal Jordan, a test pilot who receives an alien ring with special powers.

In this slot, players will recognise the likeness of Reynolds and other characters from the movie. For the most part, the characters appear as symbols that revolve around the five reels. And there are 243 ways of winnings, with the slot allowing wagers that start from just 0.40 per spin.

Playtech has also thought carefully to mastermind the special features. One of the most noticeable will be the collapsing reels, which will trigger when wins occur. Following this, symbols will explode to be filled by new symbols in their place, which allows for players to earn subsequent wins without having to spend on another spin.

The collapsing reels will also increase a power bar by a single unit with every win that is earned. Players will aim to raise the bar until they trigger one of the three outcomes, with the Fear Fight Mission unlocking up to 8 stacking wilds.

Meanwhile, the Training Centre Mission and Secret Sector Mission can both grant 10 free spins, but with varying occurs. Ultimately, however, players will be most drawn to the progressive jackpot, which is connected to the four-tier DC Super Heroes Jackpot that is awarded randomly.