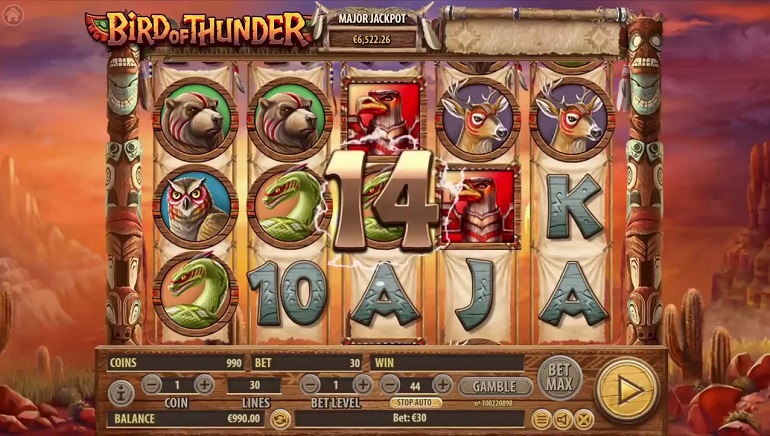 Bird of Thunder is a themed slot game based on Native American lore. Play it now by visiting Habanero casinos.

Habanero Systems has surpassed the 70-game threshold thanks to its recently released video slots. From those, the newest slot game is called Bird of Thunder and it will promise a fresh experience for players. For anybody looking for the new Bird of Thunder slot, they can find it by visiting Habanero casinos.

From a theme standpoint, Habanero has elected to look to the past for a meaningful concept. In this case, Bird of Thunder is based on a mythical eagle that is rooted in Native American lore. Habanero has responded accordingly by adopting images such as totems and buffalo within the slot’s symbology.

The symbols can appear in numerous combinations with the potential to deliver winnings over 30 fixed paylines. Those paylines are displayed across a slot interface where players will see a grid of five reels by throw rows. By combining those, Habanero has been able to show 15 symbols, simultaneously.

Bird of Thunder is a slot that will also give players the ability to adjust their wagers through an array of different values. They will always be required to cover all 30 of the paylines, but what they spend to cover each of those can be modified for different wagering values.

Habanero has also gone so far as to integrate special features in the developer’s Bird of Thunder slot. The central feature will be triggered when three totems are hit, which will lead to 10 free games being handed down. This will see each bird wild symbol being released from its position to fly across the screen.

Habanero has designed Bird of Thunder to be playable across all of the latest major devices. Desktop will be the choice for some players, but others can still expect HD visual quality on their smartphone or tablet. Bird of Thunder is designed to be instantly compatible when played from HTML5 web browsers.