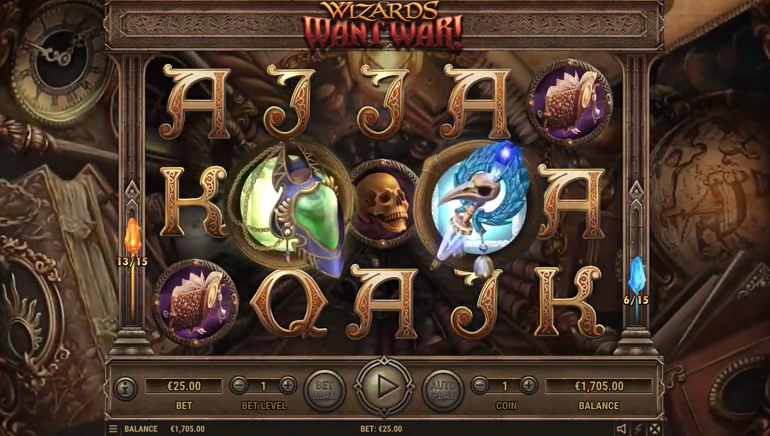 Two magical casters do battle in the brand new Wizards Want War! This slot from Habanero Systems provides a backdrop with wilds, spins, and even duels.

Wizards Want War! is an ambitiously created video slot from Habanero Systems, which has conjured up an elaborate gaming experience for players to sample. Developed with a dramatic score, the Wizards Want War slot shows of a cityscape divided into two factions: one governed by a villainous wizard and the other by a more righteous soul.

Players who join the fray shall play on a five-reel slot that is driven by a wagering system with one to ten betting levels and coins that can be valued from €0.01 to €20.00. From a functional standpoint, Wizards Want War is instantly playable on a variety of Android, Windows, and Apple devices.

A total of 25 paylines have been integrated and are capable of paying out winnings on matching symbol combos that run from left to right. A, K, Q, and J are the low-paying images, whereas the wizards and magical relics pay out much better by comparison.

Wild symbols are not overly rewarding on their own, but do have the special power to substitute for missing images. The only exceptions, of course, are the special symbols that trigger the game’s bonus features.

The Duel feature can commence in the event that the light and dark wizards are landed in unison on the first and fifth reels. A wheel shall then be spun to determine one of five wild symbol configurations. In the base game, the first wizard to then strike three times is declared as winner of the duel, with only one strike needed in free spins.

Victorious duels are counted by the orange and blue gems. Wild combinations and multipliers are the rewards. Meanwhile, free spins can be awarded for landing the green and blue bonus symbols at the same time on the second and fourth reels. At this point, another duel is guaranteed to occur during the spins.