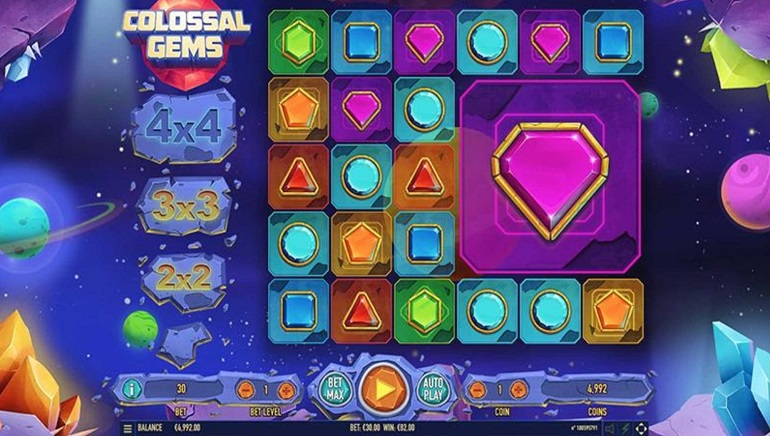 Hailing from the farthest reaches of space comes Colossal Gems, a brand new slot that is the 100th game to be developed by Habanero Systems. The studio is known for releasing the likes of Wild Trucks, Mount Mazuma, Pumpkin Patch, Ways of Fortune, Four Divine Beasts, and The Dead Escape.

In the Colossal Gems slot, Habanero has innovated without using story as the primary driving force. This time around, the main structure and the functionality of the slot interface have been shaken up. Six reels and five rows of symbols combine to present 30 symbols for the gameplay.

The sizeable interface is filled with gem symbols that boast the potential to increase to colossal dimensions. After the first win, which can occur when three or more matching symbols in land in the 30 fixed paylines, the Colossal Gems bar to the left of the screen becomes activated.

On the next re-spin, this will lead to a 2x2 block being placed in the middle of the reels. If players can keep the sequence going, then they will soon be able to unlock the 3x3 and 4x4 symbols that are waiting to be landed.

The sequencing is fundamental to the gameplay, as three consecutive wins from re-spins are going to trigger six free games. At this stage, every single symbol in the game will be able to land as 2x2, 3x3, or 4x4 versions. In fact, it is guaranteed that one will land in view on each of the free spins. This is the only time when wild symbols shall be in play.

Colossal Gems can be played from only €0.30 per spin at the first betting level and with a €0.01 coin value. For players who want to go higher, there are many more options available on the way to the maximum stake, as offered by the online casino operator.