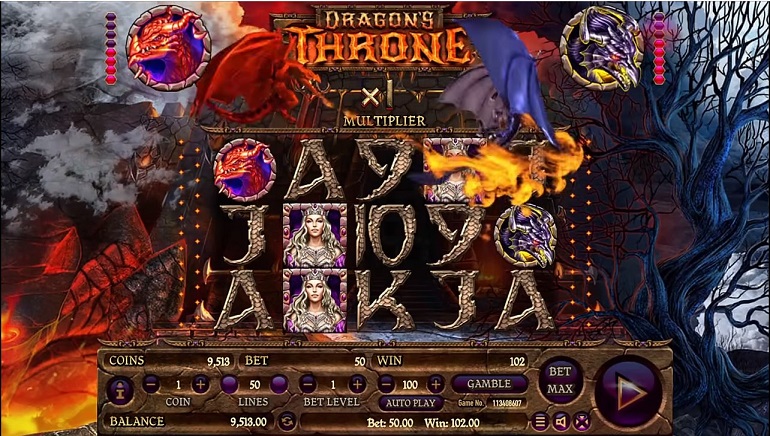 Habanero's latest HTML5 slot game, Dragon’s Throne, is an action-packed adventure in which dragons are the weapons used for dueling.

Habanero - Sheer Gaming, one of the leading suppliers of online slots and table games, has just announced the release of its latest HTML5 slot game, Dragon’s Throne. Dragon’s Throne takes players on an action-packed adventure in which dragons are the weapons used for dueling, taking place in a stylish fantasy world straight out of the fine D&D books from the day of old. Dragon’s Throne can be played at Habanero casinos such as Winner Casino, 32Red Casino and Cool Cat Casino.

Dragon’s Throne is a cross-platform, 5 -reel, 3-row, 50-payline video slot that whisks players away to a fantasy land full of dragons and promised rewards. In the game, players must command one of four dragons in an epic battle against the unrelenting Queen of Dragons. A unique triggering mechanism affects the strength of the player’s dragon, as well as his wins and losses. There are four progressive rounds, each featuring an increasing number of free spins.

Habanero CEO, Nic Ioannoy, commented on the company’s new release, “We’re very confident that Dragon’s Throne will appeal to the next generation of slots players and that its great graphics and sounds will provide them with a familiar, immersive experience.”

Habanero - Sheer Gaming is a supplier of slots and table games for both online and land-based casinos. They offer quality products at competitive rates, and their games are tailored to operate on a variety of devices in multiple territories. Habanero’s impressive portfolio includes 60 slot games, six table games, and 10 video poker games.

Get Ready To Plunder Casinos With Vikings Unleashed MegaWays Slot

Become the Only King with Microgaming's New Forbidden Throne Slot