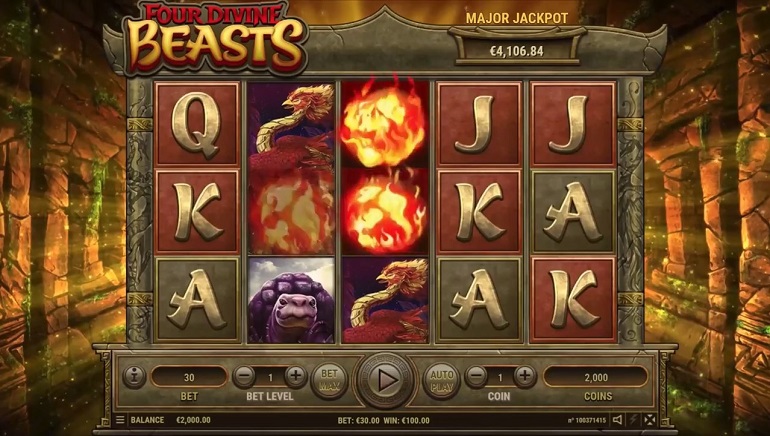 In Habanero’s new slot, Four Divine Beasts, players are plunged into the middle of a Chinese folk story; you must win the favor of each divine beast in order to gain wins.

Fantasy fans — it’s time to get excited. Habanero has just released its newest slot game, Four Divine Beasts (not to be confused with the divine beasts featured in the famous video game, Legend of Zelda.)

In Habanero’s slot, players are plunged into the middle of a Chinese folk story in which the sky is divided into 4 sections, each ruled by a different divine beast. Throughout the game, players must win the favor of each of the 4 beasts in order to gain more and more coins.

4 Divine Beasts is a 5-reel, 3-row slot, available on mobile and desktop. The slot is visually striking and perfect for players who enjoy medium to high volatility slot games. The premise of the slot revolves around the 4 divine beasts: the Azure Dragon, the Vermillion Bird, the White Tiger, and the Black Tiger. These beasts are also featured on the reels and expand to take up more than one space in order to help players accrue wins.

Other reel symbols include Chinese-style letters, a yin-yang, and Chinese orbs that combust or break into waves whenever 3 or more land on the reels. When this happens, players garner more points. There is also a bonsai tree wild symbol, which cascades from the top reel down to the other reels and creates more winning opportunities.

There’s a neat little special feature in the base game of this slot; when 3 yin-yangs appear on the same payline, 7 free games are triggered. The free games can be triggered over and over again, giving players tons of chances to amass more wins.