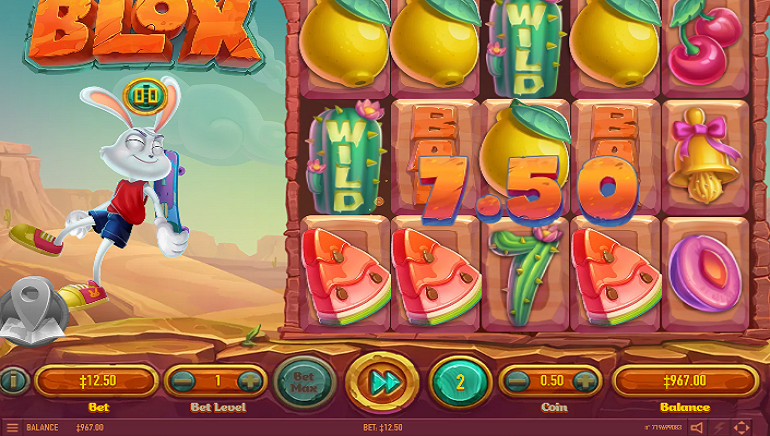 Loony Blox is a new slot from Habanero that takes players on a cartoon journey around a map, where they can trigger free games.

The latest slot from Habanero is an innovative game where cartoon animals can race around a map, rewarding players at online casinos with a range of special features. Loony Blox is a high variance slot that can be played on PCs and mobiles.

Players start with five reels, crossed by 243 different ways to win. The reels sit with a desert setting, overseen by characters such as an elephant, wolf, and rabbit. Other symbols include watermelons and lemons, given an animated twist, cactus-style 7's and BAR icons.

Depending on which character is standing to the side of the reels, players will benefit from expanding wild symbols, a win both ways mechanism, or locked reels with matching symbols. Each animal stays on duty for up to 250 spins.

Any cartoon character appearing in a winning combination triggers the special map feature. The scene changes to a series of roads in the desert landscape, with the elephant, wolf, and rabbit ready to drive their colourful cars. They travel across the screen, triggering free games when landing on green dots.

Each characters' special reel modifiers are active, depending on who started the free spins feature. If 2 or 3 characters land on a dot at once, their powers are combined during the bonus feature.

High Volatility In The Desert

The high variance of Loony Blox combines with average payouts of 98.02% to give players the chance to claim big wins. With the perfect combination, prizes reach a maximum of 4,864x the total stake. It joins over 100 games from Habenero.

Commenting on its latest launch, Toni Karapetrov, Head of Corporate Communications at Habanero said: “Undoubtedly one of our most thrilling slots to date, Loony Blox is crammed with lovable characters, exciting gameplay, a funky soundtrack and up to 12 free games of potentially huge wins. We’re sure it’s going to be a hit with players and operators alike.''