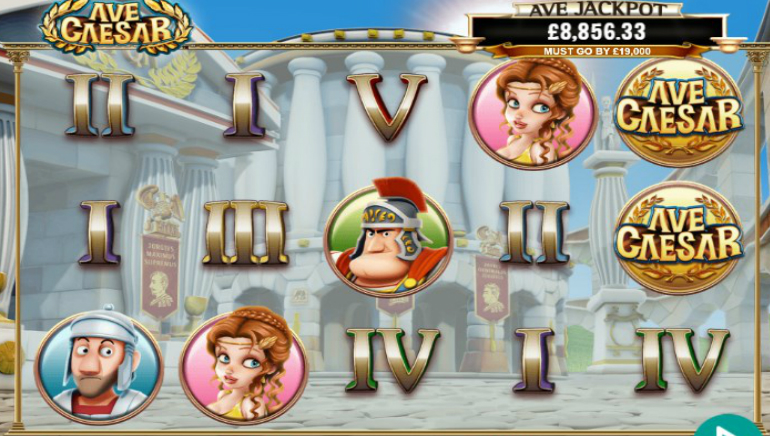 Ave Caesar gives players the chance to see Rome if it were a slot game built with humour and abundant special features.

Historical slots often adopt a slightly more serious tone, but Ave Caesar is poised to inject humour into proceedings. Leander Games is behind the development of the Ave Caesar slot, which is newly released for 2018. At a glance, it would appear that the slot has a broad range of special features.

Leander has used 3D cartoon visuals in the design of Ave Caesar, with players introduced to the finely constructed streets of Rome. Meanwhile, there is a legion of Roman soldiers and other important characters stationed on the five reels and three rows. Players can attempt to match those symbols across 20 fixed paylines.

A Legion of Special Features

Players will encounter a wide selection of special features that can emerge in the base game experience. There are four that can be triggered at random, starting with Hannibal’s heroes, where the legendary general summons elephants onto the screen to deploy wild symbols.

Gauls can also make an appearance, but will lob stones that can transform into matching symbols, with random multipliers potentially added as well. Next is the Centurion Maximus feature that can reveal colossal two by two or three by three symbols. Finally, Caesar can appear to provide five matching symbols, winnings, or one of four special features.

The four special features are triggered by matching the bonus symbol on reels one, three, and five. This will lead to the commencing of four possible bonus features, including Caesar’s Conquests, Roman Empire, Glory of Rome free spins, and Druid free spins, which can potentially add combinable multipliers, sticky wilds, and moving wilds.

There is also the Ave Jackpot that causes a percentage of all player wagers to be combined for a pooled prize. Odds of winning the progressive jackpot are increased by the prize fund rising, as well as for players who stake larger amounts. If all else fails, then Ave Caesar does have a gamble feature that can be used to increase small sums of wins.

For reference, the Ave Caesar slot is out now at Leander online casinos and is playable over multiple devices, including many popular desktop, smartphone, and tablet devices that are available in the marketplace.