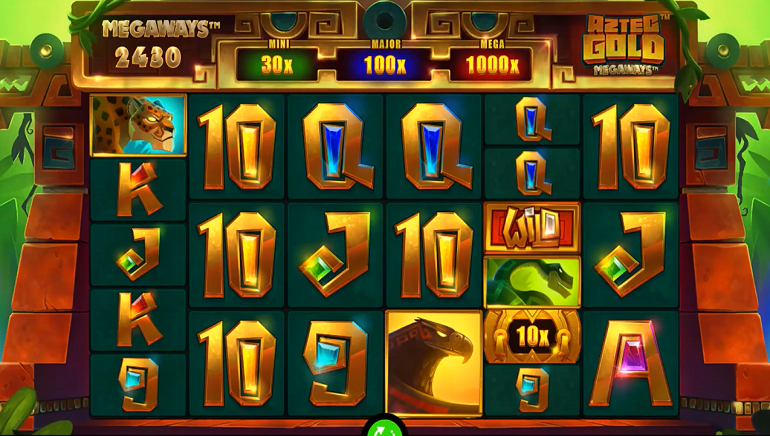 Aztec Gold Megaways is a new slot from iSoftBet where players will discover ancient treasures and up to 117,649 ways to win.

There's gold in the rainforests of Central America, as the Aztec Gold Megaways slot hits online casinos. This 6-reel game is the first from iSoftBet to use the increasingly popular Megaways format under license from Big Time Gaming. Cascading reels, respins with multipliers and up to 117,649 ways to win are some of the highlights.

Start The Quest For Gold

Stylised jaguars, snakes, and eagles appear across the 6 reels, with golden, jewel-encrusted card symbols paying smaller prizes. The Megaways system sees a different number of symbols on each reel with every spin. Just 2 symbols could appear, or up to 7, with more ways to win available as players see additional symbols on the reels.

Under the Megaways system, winning symbols explode, leaving space for new ones to drop down, potentially leading to more wins from the same cash stake.

A random Max Megaways feature guarantees that all reels fill with the maximum number of symbols in a spin.

A golden wild symbol substitutes for others, apart from the Sun Disc. When at least 5 Sun Disc icons appear at once, players are rewarded with the Aztec Gold Cash Respins feature. Three respins of the reels are triggered, and if any more Sun Disc symbols appear, they reset the spins back to 3.

Reels that fill with Sun Disc symbols will multiply wins during the feature, with the potential for wins of 1,000x the stake.

Michael Probert, Chief Commercial Officer at iSoftBet, said: “The hugely popular Megaways mechanic has been one of the most important innovations in our industry, and we are thrilled to be bringing our own title to this market with the release of Aztec Gold Megaways™.

“Essentially, we wanted to stay true to the genre, with cascading wins and up to seven symbols per reel, but have added a Cash Spins bonus, which we feel gives the game a unique edge.''