Headbanging New 'Turn It Up!' Slot From Push Gaming 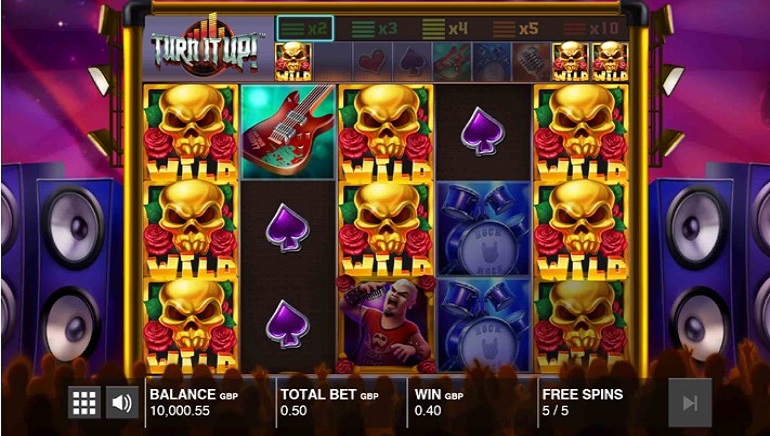 Turn It Up! is a new slot from Push Gaming that takes players right into the mosh pit at a heavey metal concert. Wild symbols, free spins and special Reel Enhancers are among the awesome features

Push Gaming has just announced a new rock-themed slot. Turn It Up! sets the 5 reels and 10 paylines on the stage at a heavy metal concert, accompanied by a soundtrack that wouldn't be out of place at a Guns 'n' Roses gig.

The symbols include guitars, a drum kit and microphone, with the band members paying out the top prizes when landing across a payline. The lead singer and a skull-embellished wild symbol will each pay out 25x the stake when landing right across the reels.

Playing card suit symbols fill out the lower part of the paytable with just 1x the stake returned when matching icons cross a payline.

A special Reel Enhancing feature can turn losing spins to the advantage of players. Any losing spin will see either low value symbols removed, multipliers added to the next win, or a random symbol turned into wilds at the end of the next spin. These features are collected over any sequence of losing spins, and removed once players land a winning combination, with any accumulated multipliers applied to the payout.

If the bonus symbol appears on reels 1, 3, and 5 at the same time, 5 free spins are awarded. During these, Reel Enhancing features are collected as normal, but not taken away in winning spins. If the last free spin isn't a winner, the One More Time feature sees extra spins added on until players get a prize-winning combination.

James Marshall, Push Gaming Managing Director, said: “Turn It Up is, to date, one of the most exciting games we’ve released. The game has awesome sounds and visuals, and we anticipate that our innovative Reel Enhancement System, which makes use of ‘dead spin’, will make Turn It Up! a big hit with slot players.”