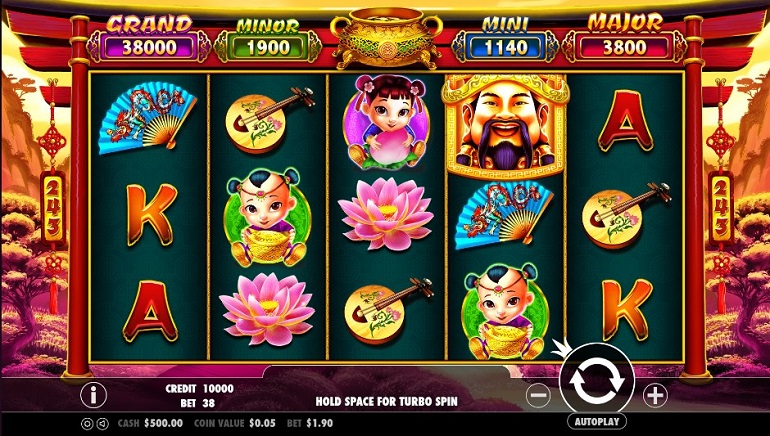 The Chinese god of prosperity will shine down on the most fortunate players who try Caishen’s Gold.

Pragmatic Play casinos have welcomed a brand new slot game that taps into Chinese mythology. As of September 2017, players can seek out their fortune by interacting with Caishen, who is the worshipped as the Chinese god of prosperity. Caishen’s Gold has been developer with a number of features to make the slot live up to the legend.

Technically, Caishen’s Gold has been produced using five reels and three rows. These combine to provide 15 symbols that shall offer 243 different ways of winning. Meanwhile, it will take 38 coins in order to cover a single spin, with the lowest coin value starting from €0.01.

Players can also increase the betting level from one to 10, with each of those featuring 38 coins. At the maximum, it will be possible to stake up to €0.50 on every coin. From a functional standpoint, Caishen’s Gold has been designed to increase the potential values of the four jackpots when players raise the number of coins.

Caishen’s Gold has also been equipped with wild symbols that can substitute for all others except for the scatter symbols. Wild symbols served another purpose in that at least one must be on the reels or else the jackpot game cannot be triggered.

To claim free spins, players will have to land three or more scatter symbols in Caishen’s Gold. The scatters must appear on adjacent reels, but will yield 10 free spins while also removing the less rewarding symbols in the game.