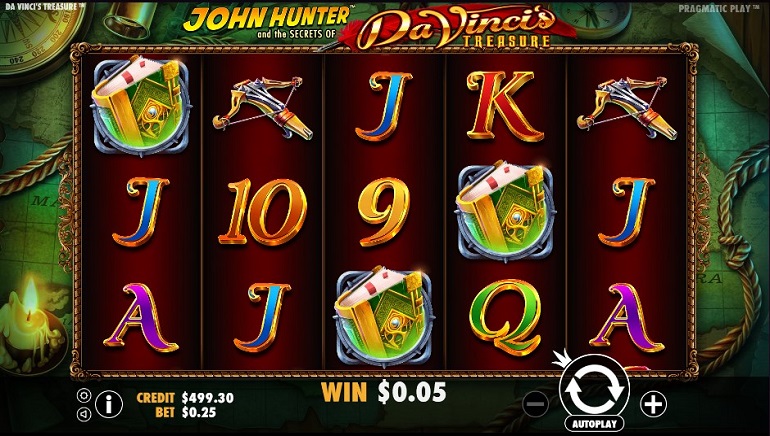 Da Vinci's Treasure is an exciting new slot from Pragmatic Play, where brave explorer John Hunter is on a quest to uncover rich features such as free games, prize picking rounds and a special Map Quest.

A Tale Of Adventure

Da Vinci's Treasure is a 5-reel slot which has 243 Ways to Win across the game. Playing card icons are joined by some inventions, a crossbow, book and John Hunter himself, who pays 25x the stake when he lands across all 5 reels. Leonard Da Vinci is a wild symbol, able to act as all except the Codex, a cylindrical puzzle device that unlocks bonus rounds.

One of 3 bonus rounds will be randomly awarded when the Codex scatter symbol is seen in 3 or more places at once. Players could be tasked with selecting from a series of famous paintings to uncover an instant multiplier award, or they could trigger a free spins round. During each of the 12 free games, a win multiplier increases by 1x. If the spins are retriggered, up to 60 free spins are possible, with a huge multiplier of 60x active on the final one.

A special Map Quest feature plays out on a treasure map. Players spin a wheel to move around it, collecting prizes along the way. If they reach the last of the 23 sections, a prize of 100x the stake is waiting for them to collect.

A Game For Desktop And Mobile Play

Da Vinci's Treasure works on all the popular mobile platforms as well as desktop PC's and can be played for as little as 0.25 per spin.

Commenting on the new release, Melissa Summerfield, Chief Commercial Officer at Pragmatic Play, said: “We are delighted to unveil our latest show-stopping slot, Da Vinci’s Treasure. Its immersive storyline and thrilling bonus features make it one of our most jam-packed games yet.''